The final instalment of favourite discoveries of 2011 comes from Maxine Clarke who has chosen a tv series and a book.

I think my two crime fiction discoveries of the year have been The Killing (though I prefer the straight translation of Forbrydelsen, The Crime) Danish TV series and the Norwegian novel Dregs by Jorn Lier Horst.

The Killing (series 1) was compelling and tense viewing. For me, the best thing about it was the character of Sarah Lund because at last here is a female TV detective who is a real person, not forced into any of the usual gender cliches that the medium seems to insist upon (and why I rarely watch TV drama). The obsessed personality of Sarah Lund as portrayed by Sofie Gråbøl reminded me of the last time I saw a filmed crime drama that had that same "something special" about the protagonist -- that was William Peterson's portrayal of Will Graham in the 1986 film Manhunter, from Thomas Harris's novel Red Dragon. That film did not do well at the box office but who could forget the portrayal of the man who was prepared to give up everything in order to solve the crime? Sarah Lund as portrayed by Gråbøl has that same kind of focused, intense seriousness, indeed, the script takes her further than the Graham character in failing to provide a "happy ending", even better (as we can look forward to more stories about this amazing woman). There were aspects to the series that I did not like so much, but Sarah Lund and her jumper are, for me, as close to perfection as crime fiction can get.

The book discovery of the year for me was Dregs by Jorn Lier Horst translated by Anne Bruce. It may not be my favourite book of the year or the best crime novel ever written, but these days when it is so hard to find a straight-down-the-line, engaging, reliable police-procedural series - tough-minded but with a social conscience - this book was like a gift from heaven. 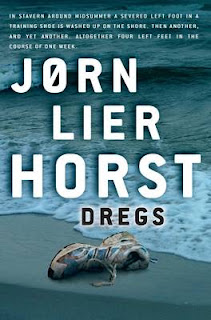 From the publisher's blurb:

Meet Chief Inspector William Wisting, an experienced policeman who is familiar with the dark side of human nature. He lives in challenging times for the Norwegian police force, meeting them with integrity and humanity, and a fragile belief that he can play a part in creating a better world.

Dregs is the sixth novel in a planned series of ten. The author is a retired Norwegian policeman whose role model (crime fiction-wise) is Henning Mankell and his Wallander series. The author says: "I would like to be a police officer like Wallander, an upright and good detective who led the work on major cases. A policeman with a conscience, integrity and humanity and an involvement in his community beyond the individual, a true commitment to my fellow human beings.

In Dregs I think he has succeeded in this and, vitally, has created a very readable story and interesting characters. More about this author and his books can be found in this wonderful interview at the Cyprus Well website.
Posted by Karen (Euro Crime) at 7:50 am

I'm convinced about Dregs with all of the good reviews it's generated. It's on my Book Depository wish list, but actually will be purchased soon.

I just needed a break from the severed feet scenario, which I'd encountered twice in 2011.