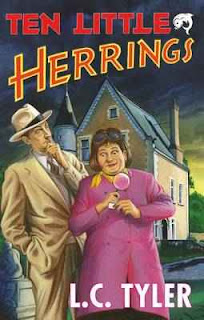 I read and reviewed L C Tyler's first "Herrings" book over three years ago and when the fourth dropped through the letterbox recently I realised it was about time I read the next one, and the next and the next...

I really enjoyed THE HERRING SELLER'S APPRENTICE which introduced crime writer Ethelred and his agent Elsie. The ending of APPRENTICE, seemed to me, to leave the author with some work to do to set up a series. However L C Tyler has managed beautifully and cleverly to construct a way in which there can be more Elsie and Ethelred mysteries.

In TEN LITTLE HERRINGS, Elsie and Ethelred are thrust into a classic country house murder set-up. Ethelred is in France and Elsie joins him to escort him home having flushed him out of hiding by cancelling his credit cards. The run-down hotel has been hosting a stamp fare and there are a number of guests still there who turn out not to be quite as unknown to each other as they'd like to make out. When there is a murder, the only possible conclusion is that it was one of the guests whodunnit. A second death has the police locking down the hotel and banning anyone from leaving.

And so the guests become amateur sleuths with Elsie taking it very seriously and getting herself questioned by the police on a frequent basis. Her love of chocolate also gets her into some scrapes (eating the evidence anyone?), meanwhile Ethelred has a reason for being at this hotel which he keeps close to his chest.

As in the first book, the narrative alternates between the two main characters - each having their own font type - and the reader gets to see the story from two viewpoints - often wildly different!

TEN LITTLE HERRINGS is very amusing and I especially love reading Elsie's chapters with whom I perhaps, worryingly, can often identify. I don't think the crime plot works as well in TEN LITTLE HERRINGS as it did in APPRENTICE (which is a hard act to follow) as though I love a good puzzle-style mystery this one didn't grab me that much, however what kept the pages turning for me was the humour and to see what mad-cap things Elsie would get up to next. The next in the series is THE HERRING IN THE LIBRARY which has just won the 'Last Laugh Award', and I definitely won't be leaving it three years before I read it.

TEN LITTLE HERRINGS was shortlisted for the Edgar Award for Best Paperback Original.
Posted by Karen (Euro Crime) at 9:50 am