Recently I downloaded the Authors on Tour podcast featuring Camilla Lackberg. It's thirty minutes long and includes the author reading from The Ice Princess and answering questions from the audience. I've just finished listening to it and: 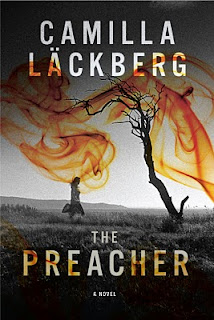 snippets include the fact that she's recently submitted her eighth book in the Erica & Patrik Fjallbacka series and that due to increasing demands on promoting and writing other books (including two cook-books and a children's book) she'll be dropping the pace to one crime book every other year. Patrik was based on her husband at the time and she made Erika very different to herself. She also gives an explanation as to the appeal of her novels around the world.

The Ice Princess has recently been released in paperback in the US and The Preacher was published last week in hardback in the US. In the UK we are up to the fourth book, The Gallows Bird. The fifth and sixth (The Hidden Child and The Mermaid) should be out in the next twelve months.

The first four books have been translated by Steven T Murray but the later ones will be translated by his wife Tiina Nunnally. Steven has translated Stieg Larsson and Henning Mankell and Tiina translated Smilla's Sense of Snow/Miss Smilla's Feeling for Snow by Peter Hoeg which was one of the instrumental titles in getting translated crime fiction to a wider audience. Tiina's work will also be familiar to readers of Karin Fossum (translating as Felicity David) and most recently Mercy by Jussi Adler-Olsen.
Posted by Karen (Euro Crime) at 9:30 am

Update from the New Mexico translation factory: Camilla's THE MERMAID has been renamed by HarperCollins THE DROWNING. Camilla did a great tour of the States in March and April (we also appeared with her in Scottsdale, Arizona) and her fame is growing steadily here.

Tiina also has a title by Arne Dahl coming out soon from Pantheon: MISTERIOSO (the title refers to the tune by Thelonious Monk).