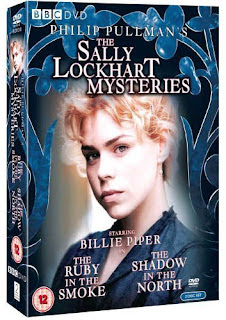 I walked into W H Smiths this morning and almost collided with the display of empty DVD boxes of the two Sally Lockhart 'mysteries' which have been released today in a box set. I imagine that explains why neither episode has been repeated (strange for the BBC...**).

Amazon.co.uk and Play.com have the set for a shade under £13. DVD details from amazon:

DVD Description
This DVD includes two BBC adaptations - Ruby in the Smoke and Shadow in the North - from a series of novels by the award-winning author, Philip Pullman. The stories follow the courageous and vibrant young heroine, Sally Lockhart, played here by award-winning actress, Billie Piper, who is a 16-year-old sleuth in the Victorian era.

The first dramatization, was transmitted in December 2006 (to over 7 million viewers); the second, The Shadow in the North, aired on 30 December 2007.

The Ruby in the Smoke
Sally, recently orphaned, is alone and being hunted by an assassin. With her new friends - young photographer Frederick and quick-witted street child Jim - she must discover her father's killer. Facing them is an unseen, murderous opponent and at the heart of it all, the deadly, blood-drenched secret of the ruby in the smoke.

The Shadow in the North
Once again Pullman's much-loved and fearless heroine Sally Lockhart embarks on a mission – this time to find out why her elderly client's investment crashed and what links the clairvoyant's murderous vision to the rich industrialist, Bellmann.

**The Shadow in the North can be watched on the BBC iPlayer site for 3 more days only.
Posted by Karen (Euro Crime) at 7:56 pm

Labels: Billie Piper, Philip Pullman, Sally Lockhart, The Ruby in the Smoke, The Shadow in the North

We watched the S in the N over Christmas (and the R in the S when that came out). Malcolm and I thought it dreadfully clunky but the girls loved it. (Cathy has read all the books twice when younger, but Jenny does not seem that keen.)
Not sure whether to get the DVD or not -- Cathy has a birthday coming up -- I was in our WHS yesterday (Sunday) and there was no sign of this, so well spotted, you must be one of the first to spy it!