The Crime Fiction of the Isles of Scilly 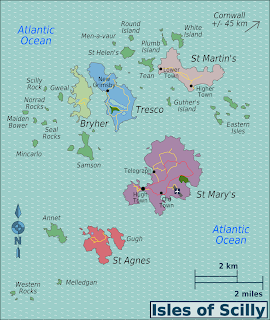 Here's another entry in my (occasional but hoping to become more frequent) crime fiction by county series. Though the Isles of Scilly form part of the ceremonial county of Cornwall they have a separate local authority which has the status of a county council (source:Wikipedia).

I have recently purchased Hell Bay, which looks to be the first in an excellent new series by Kate Rhodes, and I was intrigued to see what else was set in the Isles of Scilly. Not much it seems! I welcome any additions to my short-list.

[Official blurbs are in italics.]

DI Ben Kitto needs a second chance. After ten years working for the murder squad in London, a traumatic event has left him grief-stricken. He’s tried to resign from his job, but his boss has persuaded him to take three months to reconsider.

Ben plans to work in his uncle Ray’s boatyard, on the tiny Scilly island of Bryher where he was born, hoping to mend his shattered nerves. His plans go awry when the body of sixteen year old Laura Trescothick is found on the beach at Hell Bay. Her attacker must still be on the island because no ferries have sailed during a two-day storm.

Everyone on the island is under suspicion. Dark secrets are about to resurface. And the murderer could strike again at any time.

The sequel to Hell Bay, Ruin Beach, is out in hardback in January 2019* and looks to be set on Tresco. (*Amazon are listing the kindle version as available on 14 June 2018.)

DI Ben Kitto has become the Scilly Islands’ Deputy Chief of Police. As the island’s lazy summer takes hold, he finds himself missing the excitement of the murder squad in London. But when a body is found anchored to the rocks of a nearby cave, it appears he’s spoken too soon. The island of Tresco, and the deep and murky waters that surround it, hold a dark secret. One that someone seems desperate to uncover . . .

Robert Goddard's Name to a Face, published in 2007 is partially set on the Isles of Scilly.

A sequence of extraordinary events over the past 300 years. A chain of intrigue, deceit, greed and murder.

A fatal accident during a dive to the wreck in 1996.

An expatriate's reluctant return home ten years later. The simple task he has come to accomplish, shown to be anything but. A woman he recognises but cannot identify.

A conspiracy of circumstances that is about to unravel his life. And with it, the past.

If a man spends a night on an uninhabited island with another man's beautiful wife, the husband is not apt to be pleased about it. Especially when the husband is notoriously jealous and considerably older than his wife ... 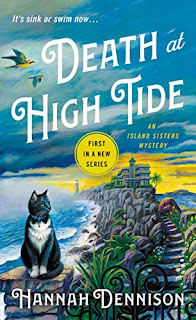 *Death at High Tide by Hannah Dennison was published by Minotaur in August 2020, and there is a sequel out in August 21.

Death at High Tide is the delightful first installment in the Island Sisters series by Hannah Dennison, featuring two sisters who inherit an old hotel in the remote Isles of Scilly off the coast of Cornwall and find it full of intrigue, danger, and romance.

When Evie Mead's husband, Robert, suddenly drops dead of a heart attack, a mysterious note is found among his possessions. It indicates that Evie may own the rights to an old hotel on Tregarrick Rock, one of the Isles of Scilly.

Still grieving, Evie is inclined to leave the matter to the accountant to sort out. Her sister Margot, however, flown in from her glamorous career in LA, has other plans. Envisioning a luxurious weekend getaway, she goes right ahead and buys two tickets--one way--to Tregarrick.

Once at the hotel--used in its heyday to house detective novelists, and more fixer-upper than spa resort, after all--Evie and Margot attempt to get to the bottom of things. But the foul-tempered hotel owner claims he's never met the late Robert, even after Evie finds framed photos of them--alongside Robert's first wife--in his office. The rest of the island inhabitants, ranging from an ex-con receptionist to a vicar who communicates with cats, aren't any easier to read.

But when a murder occurs at the hotel, and then another soon follows, frustration turns to desperation. There's no getting off the island at high tide. And Evie and Margot, the only current visitors to Tregarrick, are suspects one and two. It falls to them to unravel secrets spanning generations--and several of their own--if they want to make it back alive. 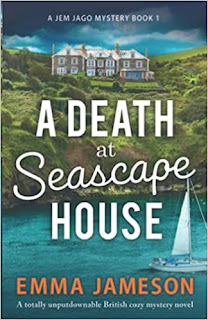 With its sweeping sandy beaches and rolling emerald hills, the island of St. Morwenna is an idyllic escape. But behind the perfectly pruned primroses and neighborly smiles a killer lies in wait…

When librarian Jemima Jago is offered the opportunity to catalogue Cornwall’s largest collection of antique shipwreck records it is a dream come true. The only problem? The collection is housed on the island of St. Morwenna, the childhood home she left years ago and vowed never to return to.

Shortly after Jem arrives back in town, island busybody and notorious grump Edith Reddy is found dead, with duct tape clamped over her mouth and nose. Jem, caught seemingly red-handed at the scene of the crime, mistakenly becomes the police’s number one suspect. The handsome Sergeant Hackman in particular can’t seem to leave Jem alone…

Jem must take matters into her own hands if she wants to clear her name. Snooping around Edith’s once-grand home, she is struck by the mess before her. The bedroom is completely ransacked and in the living room all the photographs have been removed from their frames. Was Edith’s death simply a break-in gone wrong, or is there more to the mystery that the police are missing?

Jem has a sharp eye for a clue and she soon realizes that many of the island’s eccentric residents had reason for wanting Edith out of the way. Could Declan, the curious café owner, or Bart, the fishy ferryman have killed Edith? Jem won’t rest until she uncovers the truth, but doing so will put her right in the killer’s line of sight…

There is a non-fiction book: The Life of a Scilly Sergeant by Colin Taylor (2016) which might also be of interest.

Meet Sergeant Colin Taylor, he has been a valuable member of the police force for over 20 years, 5 of which have been spent policing the ‘quiet’ Isles of Scilly, a group of islands off the southwestern tip of the Cornish peninsula.

Colin has made it his purpose to keep the streets of Scilly free from drunk anchor thieves, Balance Board riders and other culprits, mostly drunken, intent on breaking the law. This book is the first hand account of how he did it.

Coupled with his increasingly popular ‘Isle of Scilly Police Force’ Facebook page, this book charts the day to day trials and tribulations of a small-island police officer, told in a perfectly humorous and affectionate way.
Posted by Karen (Euro Crime) at 9:30 am