Review: The Body in the Boat by A J Mackenzie

This will be available in paperback in November 2018. 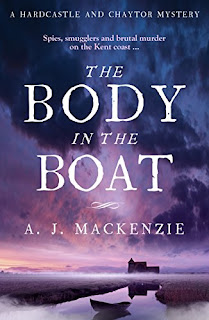 1796. Across the still, dark English Channel come the smugglers. But tonight they carry an unusual cargo: a coffin. Several miles inland, a respected banker holds a birthday party for his wife. Within days, one of the guests is found shot dead.

What links this apparently senseless killing to the smugglers lurking in the mists? Why has the local bank been buying and hoarding gold? And who was in the mysterious coffin?

Reverend Hardcastle and Mrs Chaytor find themselves drawn into the worlds of high finance and organised crime in this dramatic and dark Georgian mystery. With its unique cast of characters and captivating amateur sleuths, The Body in the Boat is a twisting tale that vividly brings to life eighteenth-century Kent and draws readers into its pages.

The expertly researched story is told by a Canadian husband and wife writing partnership and follows on from their previous stories in this series which I have read and enjoyed and which began with The BODY ON THE DOORSTEP. We learnt that in the eighteenth century many ordinary people were prodigious drinkers of alcohol and the Reverend Hardcastle was known to get through a huge amount (by modern standards of port and brandy) and fortunately a lot was supplied to him as free gifts from smugglers, keen that he as a magistrate as well as a clergyman should show a blind eye to their nefarious activities.

England is still at war with France, which feeds the atmosphere of fear and paranoia and brings with it fears that invasion is likely and that there are spies lurking every where.

For readers of the two earlier stories, you will be reassured that the Reverend Hardcastle seems, however, to have cut back on the volume of alcohol he gets through which in the first book seemed absolutely astounding. Apparently, now that he is a magistrate he has to set an example and also keep a clear head for when he is asked to act in his official capacity. However, at times of stress he seems to still enjoy a few glasses of port! He also however still seems to be at war with his housekeeper.

I was very impressed by the quality of the research and the historical detail of this well plotted and highly atmospheric story. The characters are all richly drawn and full of period detail. The rich plot kept me guessing until the final page and I look forward to reading further stories by these really very gifted authors. Most strongly recommended.

A.J. MacKenzie is the pseudonym of Marilyn Livingstone and Morgen Witzel, a collaborative Anglo-Canadian husband-and-wife duo. Between them they have written more than twenty non-fiction and academic titles, with specialisms including management, medieval economic history and medieval warfare.