Review: You Were Gone by Tim Weaver 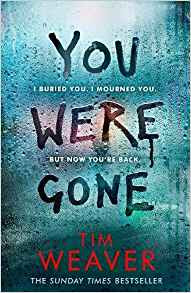 David Raker had been visiting his newly discovered daughter Annabel, and her family, in South Devon. The telephone call from Charing Cross police station was made by Detective Sergeant Catherine Field. Raker was told that his wife was at the station and had been badly injured and told them that he had done it.

Raker is devastated, he buried his wife eight years ago. Derryn and he had been married for fourteen years. She died after many courses of chemotherapy for breast cancer. There are some inconsistencies in this woman's story but basically she knows a great deal about their life together and looks very much like his deceased wife. The police contact St. Augustine's hospital at the woman's request and speak to a consultant there – a Dr. Erik McMillan who tells them that Raker is suffering from Capgras delusion, a condition where people believe that a husband, wife or child has been replaced by an exact duplicate.

Raker who has built a reputation on finding what happened to missing people, is facing his worst nightmare and begins to believe he is losing his mind. He still maintains that the woman is not his wife but because it's Christmas time, he can't prove it. He can't even find the death certificate he last remembers was in the loft of his house. Then when the woman goes to spend the night at a hostel the police located for her, she vanishes and of course suspicion falls on Raker.

This is the ninth book by the author in this series. I have read four of them and they are always exciting mysteries and this one is no exception. It keeps you gripped and guessing up to the explosive finish. Recommended.