Review: A Place to Bury Strangers by Grant Nicol 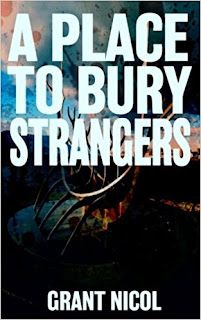 Detective Grímur Karlsson’s life isn’t a barrel of laughs. Ageing, depressed, dissatisfied with his professional life, he has become known for not solving crimes, and failing to secure arrests and convictions in his two last major cases. His world-weary cynicism has contributed to people losing lives. Occasionally he still fights his own unwillingness and loneliness to concentrate on the job. When he reluctantly starts to investigate the disappearance of Svandis, a run-away girl from a ‘good home’ and a seriously desperate heroin addict, it’s obvious that nobody believes in his abilities, including her family and her hapless boyfriend. Very soon the National Commissioner gets involved and orders Grímur to be taken off the case, though Svandis and her habit funded by prostitution don’t seem to warrant such a strong opposition from the establishment, as she is just one of many ‘sex workers’ who will agree to do anything to survive. Until of course some insignificant clues begin to appear to be pointing in the direction of certain powerful men. Yet it will be a while before the depressed policeman realises what is really going on: shortly after his superiors’ decision he became a target of a violent shooting when following another young woman who had seemed to be in danger.

As he lies in an induced coma in a hospital his boss Ævar and a colleague Eygló are called to a gruesome crime scene at a deserted building site. A charred body is found in a barrel; behind it on a wall an enigmatic message in Norwegian written in a black paint. The police establish that the corpse was of a drug dealer, low in the pecking order, and want to resolve the matter quickly, especially as there might be a perfect villain on the loose, searching for an ex-girlfriend in dodgy clubs in Reykjavik: the notorious Knut Vigeland. The Norwegian despises Iceland yet makes frequent business trips to the country: and so far his activities under the official radar had only damaged the local drug barons. Ævar is determined to tie him to both crimes.

A PLACE TO BURY STRANGERS is New Zealander Grant Nicol’s third book set in Iceland. The author’s passion for the country doesn’t mean that the story revolves around picturesque landscapes and tourist attractions. Although some well-known landmarks are mentioned, for example the famous Perlan building, they become points of focus for the plot which mostly moves between the police station, various unsavoury places in the capital, and then further away in the suburbs where nothing good ever happens to the main characters. The use of the Icelandic setting helps to shed light on some perilous issues and deeply unhappy types, as the central drug problem is closely linked to the abuse of women. The narration jumps time-wise and adds to the clever confusion which keeps it interesting. This piece of writing isn’t for those who want things cosy and pretty. But if you are not afraid of getting to know the brutal underbelly of this island, then read about a gritty and violent place to (apparently) bury strangers.