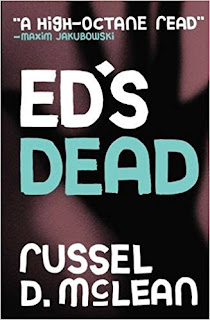 ED'S DEAD is a gripping and darkly humorous tale about a young lady, Jen, who works in a bookshop and likes Prosecco. She has tried, and failed, to write a novel and now seems to be stuck with a dodgy bloke who has an annoying roving eye for pretty women. After one too many sessions of being taken for granted, she tells him to get out. Which he does. Only to come back later, when she is out, to attempt to remove his stash from her cupboard. Returning early, Jen sees the lights are on and in fear for her life, probably due to the amount of books she reads, searches for the unknown intruder in her flat, armed with a large kitchen knife. When he emerges from the cupboard, Jen stabs him in the chest, only to discover it is Ed, her ex-bloke. Ed dies messily on the carpet in front of her and so begins a somewhat crazy period in Jen's life. After deciding not to call the police, she goes on the run - from the police, from a criminal gang who want the stash, and from the media, who soon label her the Most Dangerous Woman in Scotland. Jen keeps escaping from impossible situations. And the body count keeps on growing. Poor Jen. Most of the deaths at her hands are accidental and she has no idea how they happen exactly. She must decide what to do before the police, or the gang, or the media, catch up with her.

This book is fantastic! Fast paced and at times just utter nuts, the killings are so gruesome that they end up incredibly funny. Russel D McLean has written a beautiful masterpiece of modern Scottish Noir that leaves you unsure about whether you should laugh or cry. Jen is a very ordinary, likeable, lass who simply ups her game plan in order to survive when things take an unexpected turn. You want her to escape from her pursuers and end up rather proud of the person she becomes, despite the bloody trail she leaves in her wake. The blurb on the back of the book states that this story "proves, once and for all, the female of the species really is more deadly than the male." I reckon this might just be right!