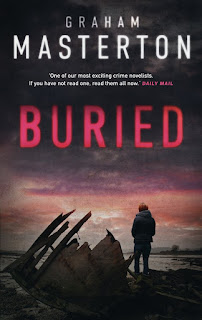 Set in Blarney, Cork, this thriller is the sixth in the series featuring Detective Superintendent Katie Maquire.

The story starts when a house renovation reveals the bodies of a family of four. When the skeletons are found to be from many decades previously, the police force consider it to be a lower priority than other more recent cases such as the smuggling and selling of imported cigarettes. However, memories run deep in the community and a possible political motive is put forward for the deaths - or executions - and revenge becomes a possibility.

The tax being lost from the sale of illegally imported goods, particularly cigarettes is bringing pressure on the police to find the distribution source and to stop it. Although local youths selling on the street are often caught, the police and the government want the person organising the scam stopped for good - a known criminal called Bobby Quilty. When one of her police officers is deliberately run down, Katie makes it her personal quest to bring Bobby Quilty to justice. His response is to kidnap Katie's ex-lover, John, and hold him to ransom against her turning a blind eye. Katie now has to plan how to bring Quilty to justice while finding John and rescuing him.

This book has scenes of quite graphic sex and a lot of violence which I found very disturbing and difficult to read. The story highlights the fact that old scores lie deep across both sides of the border and how sometimes old injustices are used by both sides of a continuing conflict.

I found the character of Katie very complex. On one hand she is shown as a strong role model for women in a man's world, overcoming everyday sexism and expectation of what a woman should be and do to achieve a very senior post. On the other hand she is portrayed as a frail woman who allows her emotion to override her good sense and this dichotomy really annoyed me at times.

This is the first book of the series I have read - it intrigued me enough to look out for others.