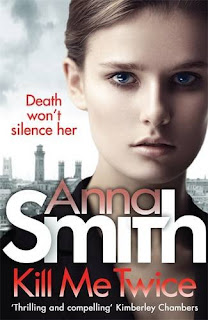 It is always an immense pleasure to be sent the latest Rosie Gilmour book to review. I love the way this feisty journalist gets her teeth into things and brings people to justice. She cares about more than just the perfect story and because of this people trust her to help them when there is nowhere else to turn.

Her creator, Anna Smith, is an award-winning journalist herself and has worked in many places in the world over the course of her career. KILL ME TWICE is her seventh book to feature Rosie Gilmour.

This time Rosie is caught up in the murky world of heroin addiction as she fights to protect two people who are hiding so that the truth will come out. A stunning young model has thrown herself off the top of a building and the celeb world is in shock at her apparent suicide. Unbeknown to those with the most to hide, this “suicide” is witnessed by another tortured soul: Milly Chambers - a former politician’s wife - who also has plans to end her life that day. She hides unseen as the young woman is brought up onto the hotel roof, fights for her life and is thrown off the building. In terror Milly runs but it is not long before she needs Rosie’s help to stay safe from her husband and others who would wish her harm.

In previous books Rosie has put her own life on the line for her witnesses. It seems as if this book is no exception as she is given a beating or two and threatened for knowing too much. There is also the issue of the secret that connects the heroin addict with the model; a story that could send sales of her paper though the ceiling. Just as long as she survives to tell the tale!

Anna Smith writes nail-biting prose that will keep you up late. It is always impossible to guess the ending and you are never disappointed. If you like feisty female lead characters, then you are going to love Rosie Gilmour. KILL ME TWICE reads well as a stand-alone but is even better if you've read the others in the series first.