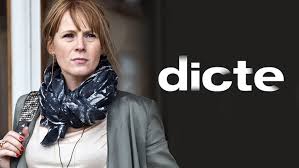 Danish series Dicte - Crime Reporter starts on More4 next Friday (3 June) at 9pm. It appears that series 1 will be shown over five weeks in two-hourly slots. There have been two series so far and a third has been commissioned.


Crime reporter Dicte Svendsen returns to her hometown of Aarhus following her divorce and stars Iben Hjejle as Dicte and Lars Brygmann (Unit One, Borgen) as Detective John Wagner.

The series is based on Elsebeth Egholm's Dicte series of books of which only two are available in English, Next of Kin and Life and Limb (books four and five in the series). These have been published only in Australia at the moment but they can be purchased via the Book Depository website.
Posted by Karen (Euro Crime) at 11:16 am

Loved this. Sorry it's a shirt series. Going to miss it next week.

Really enjoyed the programme. The star character for me was Wagner. The main problem for me was the writer's barely hidden agenda against religion. Having been one of Jehovah's witnesses for 50 years,i have never heard of them forcing a daughter to have their child adopted. It seems strange that people with faith are portrayed as fanatics or nutters and yet they can't see the mess their own disfunctional lives are in with infidelity and family breakdown effecting most of the other characters. Dicte even thinks she is a cool mum by encouraging her teen aged daughter to do drugs and go to a party dressed as a prostitute, go figure.
That said, the stories are quite good and well acted in the main. This could all have been achieved without the flawed premises inbedded n the sub plot.

Many thanks for your comments. Do you know if the book series has the same reason for adoption?