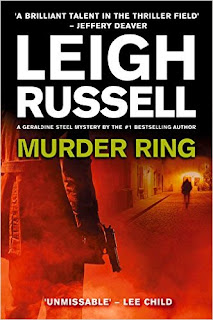 This is the next book in the extremely popular series featuring Leigh Russell’s DI Geraldine Steel. As usual it is well written but a quick read and can be devoured in a short period of time. Geraldine has gone from strength to strength since we first met her in CUT SHORT in 2009. She has moved towns, been promoted and found herself to be both highly respected and skilled at what she does. I am always delighted to get my hands on another book in the series about this particular police detective. It is only a pity that I read them far too quickly!

In MURDER RING, a dodgy, fresh-out-of-jail, house-breaker called Lenny arrives home after serving his time inside. He is late back, after celebrating his freedom with his mates, and suspiciously offers his girlfriend a diamond ring to compensate for his behaviour. She can’t believe her eyes but her luck soon runs out when Lenny decides to flog the ring and takes it back. Right about the time he is doing this, a body is found in a side street in central London. The victim, a Mr. David Lester, has been shot in the chest and is missing his nice leather jacket – as well as a box containing his wife’s very expensive engagement ring that was being resized.

It is almost immediately obvious to the reader who has the ring but the identity of the shooter remains a mystery; both to us and Geraldine and her team. She has the added worry of a new boss to impress and a new lead on the whereabouts of her birth mother, who might be prepared to meet her at last. The pressure on Geraldine seems greater than ever in this book. She is irritable with Sam, her faithful and talented DC, and silently watching her sister’s developing pregnancy all the while not getting any closer to finding herself either a man or closure on her adoption.

Just as the police begin to turn things around and have the killer in their sights, as well as locked up and under arrest at last, another body is discovered and they have to begin again. Geraldine has to dig deep to find her quarry before any more lives are lost.

Leigh Russell has begun two other series since we were first introduced to Geraldine and the others are equally excellent but this series is my favourite. I love this feisty female detective and feel as if we are friends. This latest instalment does not disappoint and has you guessing and looking for clues, right until the very end. It is interesting to follow an author from their very first book and watch how their work develops. I am really enjoying the journey with Leigh Russell and am looking forward to the many more books that are sure to come!