Review: The Disappearance by Annabel Kantaria 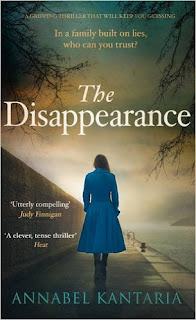 The book begins with Audrey Templeton on holiday with her two adult children, twins Alexandra and John. She goes missing, presumed having fallen overboard whilst at sea.

In 1970 Audrey Bailey, devastated following the death of her beloved father (her mother having pre-deceased him) decides to sail from England for Bombay to make a new life. She quickly falls under the spell of a suave businessman, Ralph Templeton. After a whirlwind courtship he proposes to her, but tells her he has two children, their mother having committed suicide.

Marriage is difficult because of Ralph's moods, jealousy and his need to control. She makes the best of it for the children. They eventually return to England to live. Audrey misses the sights and sounds of Bombay. She goes to Art class and gets involved with the tutor, but Ralph eventually finds out and takes a violent revenge.

After Ralph's death Audrey moves from London to Cornwall as she misses the sea. Her son John lives near and her daughter and her husband also move close. However John and Alexandra find trying to keep visiting Audrey exhausting and John in particular would like her to move into sheltered accommodation. Audrey who is only just approaching her seventieth birthday does not feel old and disagrees.

Then the twins receive an invitation to go on a cruise of the Greek islands with their mother. What could go wrong in such idyllic settings?

This is the second novel from this Dubai-based British journalist. Her first book was COMING HOME. I enjoyed the story of Audrey's life. The book reminded me of the type of book that Robert Goddard writes, and this is high praise indeed! I intend to download her first book now and would thoroughly recommend this one.