Review: Behind God's Back by Harri Nykanen tr. Kristian London 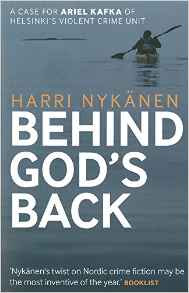 BEHIND GOD'S BACK is the third in the Ariel Kafka series but is the second to be translated. The other being the first book in the series, NIGHTS OF AWE.

Ari is one of two Jewish police officers in Helsinki/Finland and he is called in to investigate the murder of leading Jewish businessman Samuel Jacobsen. Many years ago Ari dated Jacobsen's daughter and recently Ari's brother Eli's law firm arranged a loan for Jacobsen. These factors are positives rather than meaning Ari has to recuse himself.

The killer seems to be a professional, no evidence is left behind and the getaway car is found, also completely clean. Ari's small team have to discover whether this is a racist killing or had Jacobsen got involved with criminals?

Just when Ari is beginning to get somewhere, a second killing occurs. Is there a connection to the upcoming visit by an Israeli politician? An unexpected source holds all the answers.

BEHIND GOD'S BACK is an easier book to follow than NIGHTS OF AWE. It is fairly short, so plot overrides characterisation I feel and I haven't got much of a handle on Ari's colleagues. Setting the crime in the Jewish community however, means that not only do you get information about Jewish customs but you get almost a "village" setting as Ari knows everyone and they know him and he will get information that "outsiders" won't.

BEHIND GOD'S BACK is an interesting read and Ari is a typical fictional cop: forty-ish, single, smart-mouthed but for once without a drink problem. The pace is steady, there are no dips, and overall it's a solid police procedural. I hope that more of the currently five-book series get translated into English.