Review: Only the Dead by Vidar Sundstol tr. Tiina Nunnally 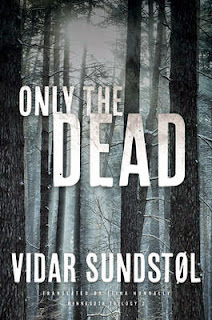 ONLY THE DEAD is the second in the acclaimed Minnesota trilogy by Norwegian author Vidar Sundstol, set around Lake Superior and takes place soon after the end of the first instalment, THE LAND OF DREAMS. In THE LAND OF DREAMS Forestry Services cop Lance Hansen found the body of a young Norwegian tourist at Baraga's Cross, and was involved in the investigation of the murder. As a local history enthusiast, Lance has also become obsessed with another possible murder that took place in the area over a hundred years previously, of a Native American trapper, Swamper Caribou, who disappeared in suspicious circumstances.

At the start of this novel, Lance is supposedly taking it easy on a weekend hunting trip with his brother Andy. But despite the tidy resolution of the murder case, Lance is riven by doubts. He is unable to voice his suspicions of Andy, who lied about his whereabouts on the night of the murder and becomes increasingly unable to act naturally around him. Lance's Ojibwe ex-father-in-law tries to reach out to Lance, sensing the stress that he is under, but Lance is unreceptive. An incident where Lance uses excessive violence when carrying out what he justifies as a mercy killing of a wild animal seriously injured by his car, shows that Lance may not the stolid principled man he seemed in the previous book.

When Lance goes out on a second hunting trip with Andy, the scene is set for fraternal relations to deteriorate further. Sundstol alternates the story of paranoid fear and suspicion between Lance and Andy with a similar tale over a hundred years early, of the relationship between Lance's ancestor, Norwegian immigrant Thorson Ormod, and the lethal distrust he develops towards Swamper Caribou, who rescues him after he falls through ice in Lake Superior and takes him to his cabin to dry off. (Though whether this version of events is to be accepted by the reader as definitive, or the product of Lance's imagination remains ambiguous).

ONLY THE DEAD has a very different feel to the previous instalment in the series. THE LAND OF DREAMS opened out, via the central character Lance Hansen, to show a whole community and way of life of a Scandinavian-American diaspora, and how they are viewed by big city incomers, such as the FBI agents involved in investigating the murder at Baraga's Cross. By contrast ONLY THE DEAD is a claustrophobic thriller focussing on the interaction between hunter and the environment, and between two sets of men, the Hansen brothers Lance and Andy, and the men of the past, Thorson and Swamper Caribou, where the hunter becomes the hunted and vice versa.

Although hunting-based thrillers tend not to be my choice of reading, I found ONLY THE DEAD was genuinely gripping. The author was very successful in building up tension in the relationships between the men, and showing how fear and poor communication can lead to fatal misunderstandings. Sundstol also very convincingly shows the perils faced by his characters in dealing with the hostile environment of the wintry lake and forest. Overall I felt this was an unexpected but surprisingly enjoyable follow up to the first book in the series, and I look forward to seeing how this trilogy is concluded. Although this book could work as a standalone, I would recommend reading THE LAND OF DREAMS before this book, to see the characters in their full context.

Great review! I agree with you about the effective building of suspense and the exploration of the consequences of miscommunication. I recently reviewed this book too.