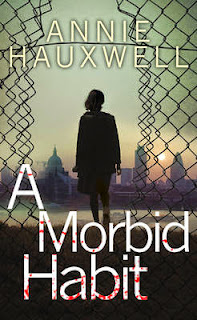 This series by Annie Hauxwell is fabulous. Her protagonist, private investigator Catherine Berlin, is a damaged soul who struggles with her heroin addiction at the same time as doing her best for the people who hire her, even when her own neck is on the block. Hauxwell writes extremely well and her tales are as addictive for her reader as the drugs are for her main character. I was delighted to be given another of her wonderful books to review.

This book, A MORBID HABIT, is set at Christmas time. Berlin actually has a job – as a security guard – and is watching monitors in the warehouse she is working in. Things start to go wrong when an undocumented delivery van arrives and appears to drop something off. Her boss tells her to forget what she saw and attempts to help her with this by means of a £50 note. But Berlin can't. She leaves her job, disgusted at the bribe, and tells a journalist friend what she has seen. This is just the beginning of her problems. Initially all seems well as she is given another contract, by a reputable company, really quickly and is set to go to Moscow to perform a due diligence investigation on a businessman. All nice and straightforward. Or is it? Her guide and interpreter is not everything that she appears to be and then a body is found at the airport, clutching a sign with Berlin’s name on it. All too soon Berlin is on the run from just about everybody and, with her passport and prescription drugs taken from her, has no way of returning home or controlling her withdrawal symptoms. The pressure builds as Berlin tries to get to the bottom of everything and the reader is left wondering whether this time she really has reached the end of the line.

If you like a good book that has a gutsy woman as the main character, as well as a nail-biter of a plot, then you are going to love A MORBID HABIT. There is no need to worry if you haven't read either of the previous two books in this series, as each one works well on its own. However the series is so good that you won't be able to leave it at just the one instalment!