Reviews: The Night Hunter & The Blood of Crows by Caro Ramsay

Two reviews today -  the fourth and fifth books in Caro Ramsay's Anderson and Costello series, starting with Michelle's review of the newest book, The Night Hunter, followed by Terry's review of the previous book, The Blood of Crows. 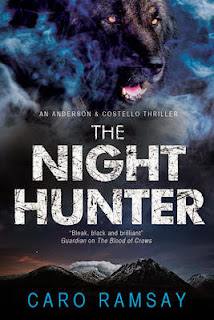 Elvira's (Elvie's) sister Sophie has been missing for some time, but Elvie is keeping a secret. Just before Sophie disappeared, she told Elvie that she had to get away for a while, but not to tell anyone. But did she really go away of her own accord, or even with her supposed boyfriend Mark? Or is she one of the latest in a line of missing women, women who have disappeared while out jogging?

Sophie's disappearance has had its effects on the family. Elvie has suspended her medical studies, and is now working as a nanny/spy for a woman called Mary and her young son Charlie, who live way out in the countryside, outside of Glasgow. Mary is married to a rich husband (Alex) who is also a bit of a bully and needs someone to keep an eye on Mary. Elvie's stepfather has set up a 'Find Sophie Campaign', Elvie's mum is just about holding it together, though cooking and refusing to eat, and Elvie's brother Grant is becoming increasingly more fragile, with his behaviour becoming more and more unpredictable. Elvie is suffering from some undiagnosed syndrome with spreading acne and hair growth under her chin, that she refuses to tackle, as she focuses on what happened to Sophie.

And then, on her way home from dinner with her family, she encounters a car, a man in distress, and a near dead naked woman. But, this is not an ordinary hit and run. Somehow, the unknown woman had fallen off the cliff above, and onto the car. And what's more, Elvie recognizes her as one of the missing women; Lorna Lennox. She is just barely alive, and dies shortly afterwards. Where had she come from? Why was she naked? Who, or what was she running from?

Through a 'self-help' group Elvie makes an unlikely but productive alliance with an ex-cop, now private investigator called Billy Hopkirk, who turns out to have been an investigating officer for one of the missing women, Gillian Porter. Together they start a bit of sleuthing on their own, while liaising with the police. It works because Elvie is desperate to find her sister, and Billy wants to find out what happened to Gillian. They work on the possibility that there could be a link between these and other disappearances, and the discovery of Lorna is the catalyst, the start of the journey to finding out what did happen.

This book contains a bunch of interesting characters; Elvie is stubborn, difficult, ugly and determined and Billy certainly sounds like someone one wouldn't wish to sit next to on a bus, but he is canny and can help Elvie work out what to do next. The police contacts are supportive, as much as they can be, but in the end it's Elvie who drives the plot forward, and finds out what happened. I thought that the book was well plotted, with some great twists along the way. It contained some excellent and realistic descriptions of a family falling apart, while trying to stay together. Sophie and Elvie were great friends as well as sisters, and the long-lasting ramifications of Sophie's disappearance on Elvie are described well. I greatly enjoyed this book, as I have done with others by this author, and highly recommend it! 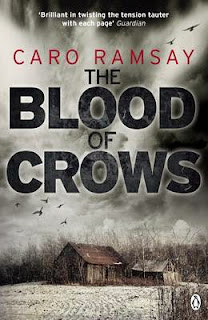 This excellent police procedural recounts the story of Detective Inspector Colin Anderson during a very hot summer in June 2010 at Partick Central Police Station, Glasgow, Scotland. Anderson and his team are called to an incident, which truly shocked him, where a young immigrant girl had been chained to a ladder immersed in the River Clyde and the tide was rising and the police just did not have the capability to remove the chains in time before the water rose. In another incident a psychopathic gang boss had been killed following an arson attack and at first his wife was thought to be the culprit until her body was discovered murdered also. A paedophile conviction of a criminal named Skelpie Fairbairn is declared unsafe - putting Fairbairn back on Glasgow's streets and leaving Anderson under investigation.

A couple of other major incidents occurred as well which racked up the stress on Anderson to dangerous levels. His wife is urging him, whenever she has an opportunity to speak to him which is very limited as he is always working, to quit the job whilst he is still eligible and migrate to Australia with her and their children. He is not attracted to emigrating as he enjoys the demands of his job in Scotland too much but he feels he has to be interested to please his wife.

Anderson feels that he has been passed over for promotion to Detective Chief Inspector and is starting to resent it which is causing him even more stress. There is talk on the grapevine of the launch of a new Police initiative called "locust" a sort of serious crimes quad and he is of course interested and hopes he is chosen to go on to it in some capacity. To meet all these commitments Anderson is working all around the clock and discovers that a lot of the crimes he is trying to solve are connected and are masterminded by an elusive individual known as "The Puppeteer".

This is the fourth book DI Anderson book written by Caro Ramsay and my first introduction to the character and her brilliant writing. This was a really interesting book with marvellous cast of characters which I just could not put down. The only problem I had was that there was so many characters in the book that I was confused some times when picking the book up the following day, but a quick recap of a few pages and I was quickly back into the rhythm of the book and was gripped once more. I will certainly look out for her earlier books and look out for her name in the future. Very enjoyable and entertaining.

They both sound appealing, Karen - thanks for sharing the reviews.