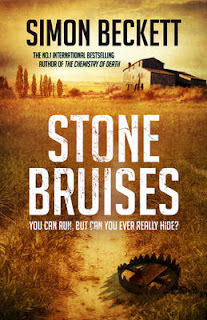 This is a stand-alone novel by Simon Beckett, not connected to his earlier four novels that feature Dr David Hunter, a forensic anthropologist. Instead this novel revolves around one man, Sean, beginning with a description of him abandoning his car in a field somewhere in France. He checks it has nothing in it that could identify him, washes off blood from the seat of the car using water from a nearby stream and removes the UK number plates. But just as he is about to walk away, he spots a package of a ‘white substance’, which he reluctantly has to take with him. He destroys his SIM card as he walks away, and takes a lift from a passerby. It is clear that Sean has done something, and wants to hide away, but we don’t know what he’s done, or why. Gradually, as the book unfolds, a few glimpses into his previous life in London emerge, and a story is slowly pieced together.

But where will he go? Soon, that choice is taken away from him, as he steps onto an iron hunting-trap in a field, badly damaging his foot. Now, he has to stay with the family, on the farm that put the trap there, while he slowly recuperates, staying in the barn just outside the farmhouse. The father, Arnaud, is clearly antagonistic towards him, and would rather Sean left, his wife died some time ago, and there are two daughters, Mathilde and Gretchen, and Mathilde has a child of her own (but the father is absent).

Gradually the French family accepts Sean and he starts working for them, once he begins to recover from his injury. The family dynamics both intrigue and annoy him, but it suits him to stay on the isolated farm, where there is no immediate danger that he will be found. However, it quickly becomes clear that there are some deep dark secrets hidden away that no-one will discuss. Sean’s presence ignites a change in dynamics, which eventually force the secrets out, leading to a climactic ending, at the farmhouse, and eventually a final unveiling of Sean’s own personal story.

Told in the present tense, which I got used to after a while, STONE BRUISES is a carefully written story, nicely put together, with enough clues to help the reader try to work out what the secrets are, but with enough freedom to lob in a few surprises that keep one guessing as to what the real story actually is. This was an intriguing read, that was well plotted and a good book to keep one entertained on a cold winter's evening.