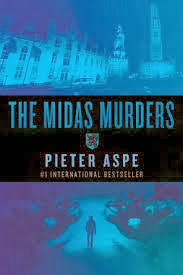 When you recall Belgium crime writers the most famous is Georges Simenon of Maigret fame. The Midas Murders is the second book by fellow Belgian, Pieter Aspe, to have been translated into English, but incredibly he has had thirty-two crime novels published in his native Belgium as well as a book for children.

Set in Bruges we are introduced to Assistant Commissioner Pieter Van In. A heavy drinker and a smoker and a chauvinist who suffers from depression. He is in arrears on the mortgage and could lose his house which is his pride and joy; he is in a relationship with the beautiful Hannalore, who is a deputy Prosecutor, and he is also regularly seeing a call girl Veronique! His conscience is his trusty sergeant – Guido Versavel.

A German business man has been attacked and dies. Van In, however, is given the task of investigating the bombing of a famous statue, the government afraid that this could affect tourism. When the two cases seem to be connected Van In and Versavel have their work cut out.

We’re introduced to the fact that Belgium is split between Walloons and Flemish and Bruges comes across as an interesting place to visit. The book was published in the mid-nineties and seems to be set in the late eighties/early nineties. The word-processor is just making an appearance, no mobile telephones are used and the Renault Espace is one of the vehicles used.

I look forward to reading more on the likeable rogue Van In.

I struggled a little with this one. I found Van In exasperating, but was intrigued by the luxury-loving climber Nicolai. The political tensions make it interesting, but the story itself sounded a bit worn to me.