Review: Norwegian by Night by Derek B Miller 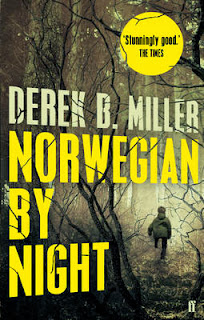 What a beautiful book! Superbly crafted and touching on a delicate subject with sensitivity and perception, NORWEGIAN BY NIGHT is a story of one man’s loss and regret and how he tries to come to terms with everything. An excellent debut novel from Derek B Miller; he is another talented new voice to keep an eye out for in the future.

The central character is Sheldon Horowitz, an 82-year-old American Jew who is recently widowed and has been persuaded, against his will, to move to Oslo to live with his granddaughter and her husband. Sheldon is a bit doddery on his feet, a bit stiff in his joints and prone to forgetfulness but when he witnesses the horrific murder of a neighbour, and ends up sheltering the dead woman’s son from the attackers, his old army training kicks in and he goes on the run to keep them both safe.

Sheldon is haunted by the ghosts of his long dead friends and has conversations with them while he is on his journey. Himself an ex-Marine who saw active service in Korea, he is still raw from the death of his own son in Vietnam. He blames himself for his son going to war in the first place – having over-instilled in him the importance of fighting for one's country, as well as the significance of being Jewish. Sheldon’s family seem to think that he is insane, and he may well be as he is frequently confused between the past and the present. One thing is true, though. He knows how to survive when people are hunting him and the journey he takes across the country, with young Paul at his side, dodging both the police and the criminals that want to kidnap the boy, is nothing short of miraculous.

To my shame, it took me longer to get into the book than it deserved but, by halfway, I was hooked and in love with dear old Sheldon. This book pulls at your heart-strings and reminds you that, just because people are old, doesn't mean they should be quietly written off, as they could do things that will surprise you.

I can just imagine Clint Eastwood as the lead in this movie.