Review: The Missing File by D A Mishani 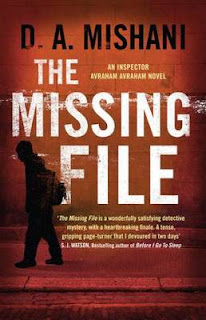 It has just gone six in the evening. Another mother sits across the office desk from Inspector Avraham Avraham. This one says that her sixteen-year old son is missing, has not come home from school. Avi Avraham is working out what to pick up for dinner and what to watch on television that evening. He explains to the mother his theory on why there are no detective novels in Hebrew. It is because “we don't have crimes like that.... serial killers, kidnappings....” the explanation is always the simplest one. The woman sitting opposite him remains looking uncertain and says little. He persuades her that it is best if the boy is not reported missing yet but that she should go home and check his computer, his emails and Facebook page – see if they give any clue to his whereabouts. Someone will check in with her in the morning. She remains unsure and Avi is disconcerted to find that he has doodled a “hangman” stick-figure on his pad, dripping ink blood. He decides to leave his phone by his bed that night in case the station calls.

At the missing boy's apartment block next day, a resident peers through his window at the police outside, in particular at the senior officer making a series of agitated calls on his phone. The resident takes his infant son to the shops in the stroller and sees the “Missing” posters that have gone up around the neighbourhood. They show the face of his neighbours' boy. When the police come to interview the residents in the block, including himself and his wife, he grows increasingly frustrated that they do not appear to be listening to the importance of what he is telling them – that he knows the boy, that he gave him English lessons. At some point he will tell them that their relationship was special.

D A Mishani is an Israeli fiction editor and literary scholar specialising in the history of detective fiction. THE MISSING FILE is his crime début and this edition is translated from the Hebrew by Steven Cohen. The story is set in the Tel Aviv suburb of Holon and its central character is Inspector Avraham Avraham, a quiet somewhat isolated man whose only birthday present is given to him by his elderly parents. Avraham spends his evenings watching reruns of “Law & Order” trying to spot investigative mistakes and work out possible alternative defences and outcomes. He is a trusting man. This is not ideal detective material you may think, but nevertheless he is specifically designed by Mishani who says in an interview: “I want a detective who acquits people — who sees people as innocent, not as guilty.”

THE MISSING FILE investigates a sixteen-year old boy's disappearance from several angles, including the workday life of Avraham, and it gradually builds its resolution with a kick of surprise at the end. It is an original crime book with an original detective. Poor old Avraham Avraham seems to labour under such a lack of self-confidence that you suspect he will throw in the towel at any moment. I have to say that I found it hard to build rapport with the characters. Part of this distancing may be the result of reading a book in translation. But some aspects of the book puzzle me – not just the title. (I never did spot a “file” that was “missing”.) One particular plot event stands out in this context. Avraham has to spend a week on a work-exchange trip to Belgium. The Belgian police squad are up to their necks in a murder investigation which Avraham is no party to and he is left very much to his own devices. The trip interrupts his own investigation and with no apparent gain except perhaps to distance him from it and to introduce a new relationship. But what really bothers me is that the murder investigation in question is a direct transposition of a highly publicized real-life British murder case from a few years ago, with only the names and places altered. Perhaps this only has relevance for British readers but I did find it a strange and uncomfortable plot inclusion.

A slow-burner with an original take on detection, THE MISSING FILE gradually builds momentum and reserves a surprise sting in its tail. My own personal jury is “out” on this book but it has generally received a good press. Try it and see. If it is for you, there is a second book already published in Israel which should doubtless be heading our way.

I puzzled over the title, too. Eventually, I figured out that it doesn't refer to a file that has gone missing, it refers to the file on a missing person, which is what the action of the book revolves around.

I think the trouble with the title is partially in the translation. The original Hebrew name of the book apparently plays with the many meanings of the word תיק. It means not only "file", and by the way of metonymy "criminal case", but also "bag", an object which plays not an unimportant role in the investigation.