Barry Forshaw's Nordic Noir is currently 99p on UK Kindle. Barry, as well as writing a new book, Euro Noir, out in August I believe, has kindly agreed to be a judge for the 2014 Petrona Award.

Euro Crime's listing of crime fiction titles by Scandinavian (Nordic) authors, available in English, can be found here, with many titles reviewed. 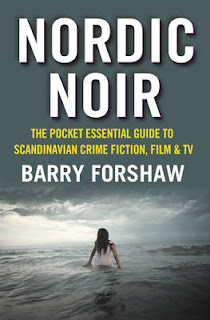 Official Blurb: Nordic Noir: The Pocket Essential Guide to Scandinavian Crime Fiction, Film and TV by Britain’s leading expert on crime fiction, Barry Forshaw, is a compact and authoritative guide to the phenomenally popular genre. The information-packed study examines and celebrates books, films and TV adaptations, from Sjöwall & Wahlöö’s highly influential Martin Beck series through Henning Mankell’s Wallander (subject of three separate TV series) to Stieg Larsson’s groundbreaking The Girl with the Dragon Tattoo, cult TV hits such as the Danish The Killing, The Bridge and the political thriller Borgen, up to the massively successful books and films of the current king of the field, Norway’s Jo Nesbo. Nordic Noir anatomises the nigh-obsessive appeal of the subject and highlights every key book, film and TV show. For both the beginner and the aficionado, this is a hugely informative, highly accessible guide (and shopping list) for an essential crime genre.
Posted by Karen (Euro Crime) at 9:00 am

Thanks for the notice. I immediately bought a copy and look forward to reading it.

Cheers for the head's up. Snagged myself a copy right away.