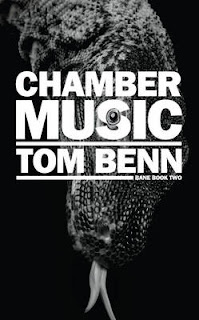 CHAMBER MUSIC is the second outing for Tom Benn's anti-hero, hardman with a heart Henry Bane, known as Bane. This book takes place in early 1998, a couple of years after the first novel in this series, THE DOLL PRINCESS. Manchester city centre is still in the process of reconstruction following the IRA bombing, and Bane and his crooked mechanic pal Maz are now working for a different gangster boss, Abrafo. Bane is living relatively peacefully with his girlfriend Jan and her semi-delinquent teenage son Trenton in Wythenshawe, when old girlfriend Roisin re-enters his life dramatically on the eve of his father's funeral.

Roisin has driven up from London with her customs officer boyfriend Dan, who has been wounded in a recent shooting and doesn't want to go to a hospital. Dan is far from forthcoming about the reasons for the shooting, and Bane doesn't trust him. But as Roisin was an old girlfriend and is sister of his close friend and associate, the violent Gordon, recently released from prison, Bane agrees to protect and assist Roisin and Dan, even though he is somewhat less than keen on Dan (whom he nicknames Knobhead). Further complications arise in Bane's professional life, due to a Yardie gangster with ambitions, Hagfish, who is keen to muscle in on Abrafo's trade. Hagfish has a pet komodo dragon to guard his valuables, and a girlfriend, Berta, who leads a rather unusual "church" of women in Hulme, and is involved with potion making. Hagfish's bid for power unleashes a trail of death and destruction and gang warfare that affects Bane and Abrafo personally.

Benn employs a dual timeline in this book, shifting back in time to relate events from eight years earlier, when Bane had his brief relationship with Roisin. Benn shows how the budding romance unravelled. At that time Bane sold drugs in the Manchester clubs in the hey day of illegal raves and acid house and became involved in a violent drug war, with certain parallels to his current (1998) situation. The split time line, whilst skilfully done, can be a bit disorientating to the reader, possibly deliberately mirroring the dizzying effect of the world of recreational drugs that Bane is involved in.

The characterisation of Bane in this novel makes him somewhat less likeable than in the previous novel in the series. In THE DOLL PRINCESS, there was a certain ambiguity to Bane's character, where in dealing with the police and other gangsters the reader felt that Bane's options remained open to stay in or move out of the gangster life. But this novel shows a more hardened, if slightly more domesticated side to him, with less of a chance that Bane can escape his criminal past. Overall this is another quality slice of noir, Manchester style, with Tom Benn as ever spot on with the slang and sense of place of '90s Manchester.