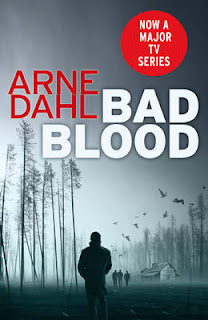 BAD BLOOD is the second in the 'Intercrime' series by Arne Dahl, the series which has recently been shown on BBC Four as Arne Dahl.

We meet the disparate group of members of the A-Unit, a small task-force of police officers from different backgrounds, almost a year after the Power Murders which took place in THE BLINDED MAN (apa MISTERIOSO). Fortunately for Sweden but unfortunately for the team, very little has come their way in terms of new cases and it's only a matter of time before the team will be reassigned.

What they needed was a robust serial killer, of a robust, international character, thought Paul Hjelm

Be careful for what you wish for, as four pages later, Hjelm's boss reports that a Swedish literary critic has been tortured and murdered at Newark Airport and that the killer is a killer of several decades standing and is on his way from New York to Sweden.

An operation to catch the so-called Kentucky Killer fails and Sweden has a serial killer to catch. The investigation doesn't go well. There are few leads to go on and the team is reduced to leg-work, checking on US citizens, until bodies begin to show up. Hjelm and Kerstin Holm are sent to New York to liaise with the FBI (where they become Yalm and Halm perhaps giving us English speakers an idea of the correct pronunciation). The FBI man who actually saw the Kentucky Killer die in a car crash, or so he thought, welcomes their input and as this is a Swedish crime novel it's no surprise that a Swedish brain-wave from Hjelm moves the investigation along.

The remainder of the A-Unit back in Sweden have also made their own discoveries and together the Kentucky Killer could be within their grasp but there is much more going on than even the Swedish authorities realise.

BAD BLOOD is an entertaining thriller which continues the tradition of social/political commentary in Swedish crime fiction. Leavened by humour and with a group of interesting characters, of whom we get to know more with Hjelm still getting slightly more of the focus, this is a story which remains current despite its original Swedish release date of 1998. BAD BLOOD covers a lot of ground in its modest 350 pages and leaves readers eager for the next instalment.
Posted by Karen (Euro Crime) at 2:02 pm