The Expo Files is a collection of some of Stieg Larsson's essays and articles, edited by Daniel Poohl, translated by Laurie Thompson and with an introduction by Tariq Ali. It's published next week by MacLehose Press: 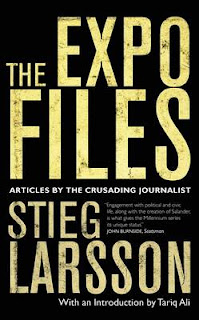 Official Blurb: Now almost exclusively known as the author of the best-selling Trilogy, as a professional journalist Stieg Larsson was an untiring crusader for democracy and equality. As a reporter and editor-in-chief on the journal Expo he researched the extreme right both in Sweden and at an international level. Collected here for the first time are essays and articles on right-wing extremism and racism, on violence against women and women's rights, on homophobia and honour killings. Included also is an account written for Vagabond magazine of his travels aboard the Trans-Siberian Express from Moscow to Beijing. His most important writings - perceptive, learned and committed texts - illustrate the breadth of his journalistic and political activities in connection with matters that were closest to his heart, and to which he devoted his life. Despite death threats and financial difficulties, Larsson never ceased to fight for and write about his most firmly held principles; it was his commitment to these which gave his best-selling novels their explosive force.
Posted by Karen (Euro Crime) at 9:30 am

This may be much better than some of the more exploitative books that have followed the success of the Larsson books. The introduction will be interesting as I have read one of Tariq Ali's historical novels, and it was far better than I expected.

He's beginning to remind me of L. Ron Hubbard, "the most prolific corpse in history" (I think he's still churning out books even though he's been dead for about 30 years).

Maxine, I expect that Stieg Larsson's post-mortem productivity will rival Jimi Hendrix's, though Hendrix could play guitar a lot better than Larsson could write.