Inspector Montalbano steps away from the canon

The next and sixth episode of Inspector Montalbano, at 9pm on 17 March, The Artist's Touch, is a new episode and is the first one not to based on one of the books. 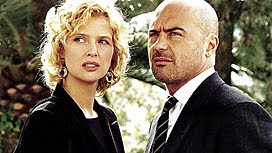 Goldsmith Alberto Larussa appears to have committed suicide by turning his wheelchair into an electric chair. But Inspector Montalbano discovers that the dead man's will, which leaves everything to his brother Giacomo, was forged. Giacomo is arrested, but he maintains that he did not kill Alberto. Meanwhile, Deputy Inspector Mimi' Augello is working on the case of a mysteriously-murdered electrician.
Posted by Karen (Euro Crime) at 9:00 am

I hope the quality will be as high as the episodes we've seen so far (which have all been based on the books, albeit in wrong order ;-) ).

I think it is from a not-yet translated book of short stories: Un mese con Montalbano

Watched this last night (having recorded it). It was quite slow with the usual slightly rushed ending, but very good and engaging. I definitely think that Camilleri must have had some hand in this, given the dialogue and some of the characters, eg the brother of the dead man, fascinating. I hope they translate those short stories soon.