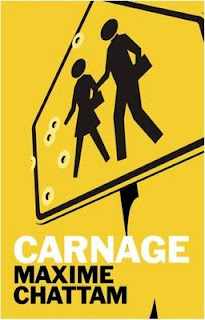 CARNAGE is a novella length detective story set in New York City by French author Maxime Chattam. The prologue describes the mass-shooting by a student of his fellow pupils at East Harlem Academy.Enter, Lamar Gallineo, a giant of a man, an African-American who has risen to the rank of Lieutenant. He is called to the scene at the Academy where the shooting has now ceased and the perpetrator, believed dead by suicide. A witness is found who saw the boy kill himself. The tragic case is closed.However the following week another mass-shooting occurs at a school, outside of Gallineo's jurisdiction this time and then a third, all the shooters are dead. What is going on? Then a link appears between the guns used at the crimes and a deeper evil is revealed. Gallineo uses a combination of intuition and going through files and paperwork to reveal the cause of these shocking events.Being a short book, there isn't much room for character development but I would love to see more of Gallineo and his diminutive partner Doris in a full-length novel. The author plays fair with the reader, the clues are there to be spotted though there is still room for a twist. Good use is made of the New York setting and wintry weather. Overall, a quick read with intriguing main characters and a good puzzle but with occasionally unpleasant descriptions, especially in the prologue.
Win a copy of Carnage (UK only) closes 31 March 2012.
Posted by Karen (Euro Crime) at 9:30 am

Karen - School shootings in real life have taken such a horrible toll and we've read far too much about them in recent years. It sounds as though this book does a solid job of exploring the way they're investigated, which is interesting. I'm glad you found it a good read.

This sounds like an interesting book, despite the awful theme. Interesting to know of a European perspective on an American case.

I agree with Maxine. It's always interesting to get an outsider's perspective on your own culture. I'll look for this one.