The next and seventh episode of Inspector Montalbano, at 9pm on 24 March, The Sense of Touch, is a new episode and is not based on one of the books but rather a short story, from a collection (Montalbano's Oranges?) not (yet) available in English. 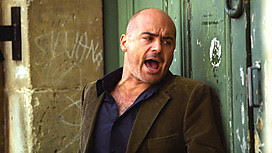 The seemingly accidental death of a blind man leads Montalbano to an island off the coast of Siciliy. Here the Inspector discovers that both the murder victim and a local fisherman had each deposited huge sums of money in their respective bank accounts. Following the mysterious demise of a second man, who was also blind, the investigation begins to focus on the operations of a charitable foundation which increasingly looks not so charitable after all.
Posted by Karen (Euro Crime) at 1:48 pm

Sounds intriguing. I am one behind on Montalbano so so far I have only watched the book ones. I thought Excursion to Tindari very good - 2 hours long and they still didn't give themselves enough time to explain it properly at the end! Excellent, though (I managed not to fall asleep this time, unlike 2 Christmases ago when I missed most of the second half!).