Two versions of the same premise are now available to UK viewers. The original Icelandic film from 2008, Reykjavik - Rotterdam, has just come out on R2 DVD and the US remake, Contraband opens in cinemas this week. Interstingly the star of the former is the director of the latter, Baltasar Kormákur, 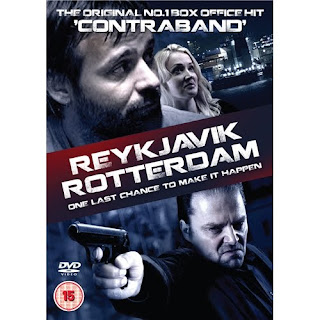 An Icelandic crime thriller with the gloss stripped away - leaving a bleak, sad and despairing narrative - director Oskar Jonasson's Reykjavik-Rotterdam hones in on a down-and-outer at the very end of his rope. For Kristofer (Baltasar Kormakur) life has been little more than a never ending series of failures and disappointments. Among other things, he made the colossal mistake of smuggling alcohol during his tenure as a shipworker - a little stunt that promptly landed him behind bars. Now, following release, he struggles to pull his life together while working as a security guard and continually attempts to support his family. Then the opportunity arises for Kristofer to do one final tour on a freighter running from Reykjavik, Iceland, to Rotterdam, Holland. Kristofer initially embraces the opportunity to work with his old friends once again - little foreseeing the malestorm of crime into which this move will plunge him. 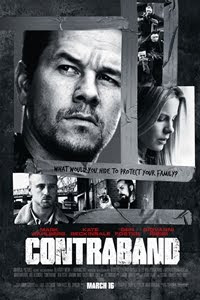 Chris Farraday long ago abandoned his life of crime, but after his brother-in-law, Andy (Caleb Landry Jones), botches a drug deal for his ruthless boss, Tim Briggs, Chris is forced back into doing what he does best-running contraband-to settle Andy's debt. Chris is a legendary smuggler and quickly assembles a crew with the help of his best friend, Sebastian, to head to Panama and return with millions in counterfeit bills.

Things quickly fall apart and with only hours to reach the cash, Chris must use his rusty skills to successfully navigate a treacherous criminal network of brutal drug lords, cops and hit men before his wife, Kate, and sons become their target.
Posted by Karen (Euro Crime) at 9:28 pm

Thanks for this news, I had scoured Amazon a few times for R.R. but never found it - now I can watch it! (Icelandic version of course).

The storyline was a great idea but the execution was terrible. This totally bored me to death. I usually like Mark Wahlberg movies, but even this one, he couldn't make it good. I just sat there wishing it would just end already. He basically did drug carrying before, but went straight afterwards.

Unknown said...
This comment has been removed by a blog administrator.
11:40 pm