Inspector Montalbano's back on track

The next and fifth episode of Inspector Montalbano, at 9pm on 10 March, is a repeat of: Excursion to Tindari, which was first shown on BBC4 in 2008, and is based on the fifth book in Camilleri's series. 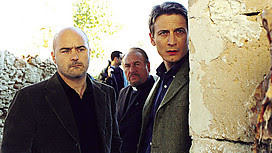 A young Don Juan is found murdered in front of his apartment building and an elderly couple are reported missing after an excursion to the ancient site of Tindari. Inspector Montalbano tries to solve these two seemingly unrelated cases amid the daily complications of life at Vigata police station. But when he discovers that the couple and the murdered young man lived in the same building, his investigation stumbles onto Sicily's brutal 'New Mafia' and leads him down a path more twisted and far-reaching than any he has ever been down before.
Posted by Karen (Euro Crime) at 8:35 pm

I'm really enjoying these. I will try to stay awake in this one, I remember falling asleep 20 mins before the end when it was shown a couple of christmases ago, so I missed the denouement! (Could vaguely remember it from the book, luckily, so could keep credibility just about intact.)