Review: Doctor Who: The Coming of the Terraphiles by Michael Moorcock (audio book) 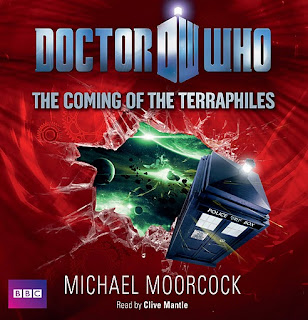 My experience of Doctor Who audio books has been limited mostly to the abridged 3 CD versions of the range of 'new' Who books, which are fairly easy reads aimed at teenagers/adults. This offering from well known science fiction author, Michael Moorcock is quite a different kettle of fish.

The Coming of the Terraphiles features the eleventh Doctor and Amy (but no Rory). The Doctor receives a garbled message from a familiar voice which leads to him joining a group of Terraphiles (Earth lovers) who are playing in a tournament of 'classic' old, old Earth games. It's important to the continued life of the universe that the team he joins wins the ultimate prize of the Silver Arrow of Artemis.

The Doctor and Amy meet the Terraphiles on the planet Peers and then have to make their way to the final on Flynn, in the Miggea system in the centre of the galaxy. Along their journey they stay in a stately home and meet characters out of a P G Wodehouse novel, go on a ship captained by a centaur, make a trip to the Second Aether, encounter General Frank/Freddie Force and his Anti-Matter Men who want to destroy the universe and meet allies such as Captain Abberley and the Bubbly Boys and also, an unknown quantity in the shape of the pirate Captain Cornelius.

Though the underlying plot is fairly straightforward: the Doctor must get from A to B, fight off enemies, win the Arrow and put the balance of the universe back to rights, this was quite a difficult listen at times. There was a lot of detail about the characters and places and most confoundingly for me - the science of space-time, which went mostly over my head. It does take a while for the Doctor and Amy to become the focus of the story but there are enjoyable chapters on Peers to compensate.

This is a novel with a scope hugely outside the normal tv episodes or Doctor Who books; there is a large cast, about fifty-percent non-human which would be impossible to portray outside of a feature film, as well as multiple universes, gigantic (Babylon-5 style) space-ships and numerous planets. The tale is not without humour though: the descriptions of the games are very funny; the Doctor's speciality is Cracking the Nut (with a sledgehammer) as are the customs that have survived, though modified over 50,000 years and the Wodehouse characters: Bingo Loxesley and Mr and Mrs Banning-Cannon (so well portrayed by Clive Mantle) are a hoot. Indeed Clive Mantle does a sterling job with the narration. He has to provide many voices, both human and alien and even has to sing from time to time. His Doctor and Amy are immediately recognisable even though he's not imitating the tv actors.

In conclusion, thought it's always great to read about the unseen adventures of the Doctor, its more complex ideas and language may mean that The Coming of the Terraphiles is not for everyone, and though I enjoyed the audio version, for once I think I'd probably have got on better with the print version.
Posted by Karen (Euro Crime) at 10:23 am

Labels: Doctor Who, Michael Moorcock, Reviews, The Coming of the Terraphiles