Murder on the Orient Express

Christmas Day tv's looking good in the UK: Doctor Who: A Christmas Carol (update: 6pm UK, BBC America at 9pm ET) and Murder on the Orient Express on ITV at 9pm. 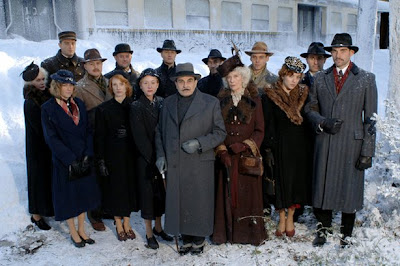 From the ITV press release:

World-famous sleuth Hercule Poirot has just solved a complex case in Istanbul for the British Army, when he witnesses an act of brutal injustice on the streets. Relieved when a new case calls him back to London, Poirot’s old acquaintance Xavier Bouc (Serge Hazanavicius), secures him a last minute ticket on the luxurious Orient Express.

Whilst aboard the train Poirot is approached by ruthless American businessman Samuel Ratchett (Toby Jones) who offers him $10,000 to watch his back. Could Ratchett be fearful of the Italian Antonio Foscarelli (Joseph Mawle), English Colonel John Arbuthnott (David Morrissey), pushy American Mrs Hubbard (Barbara Hershey) or Hungarian diplomat Count Andrenyi (Stanley Weber) and his wife, Countess Andrenyi (Elena Satine)? Poirot awakes the following morning to find the train stuck in a snowdrift and Ratchett dead in his compartment

With nothing but a scrap of paper to go on, Poirot must piece together Ratchett’s identity before he can establish which of his fellow passengers murdered him and their motive.

David Suchet says: “It's an honour to have such a wonderful international cast on board for this world famous murder mystery. Writer, Stewart Harcourt, has created an exquisite script. His attention to detail is impeccable.”

Producer Karen Thrussell says: “We’re all incredibly delighted that 21 years after David Suchet first played Hercule Poirot he is now starring in arguably the most ingenious and best loved Agatha Christie title of all time.”

Glad I found this blog and look forward to following it. I'm a huge fan of PBS and BBC America. Some of the best shows around.