New Competition - Win From the Dead by Mark Billingham (world-wide)

Euro Crime has three copies of From the Dead (hardback) by Mark Billingham to giveaway. Just answer the simple question and include your details in the form below.

This competition is open internationally and will close on 30 September 2010.
Only 1 entry per person/per household please.
(All entries will be deleted once the winners have been notified.) 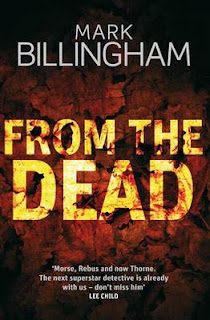 When Donna Langford receives a very recent photo of her ex-husband in the post, she gets the shock of her life. Because she's just spent ten years in prison for organising his murder. When her daughter goes missing, Donna believes there can only be one man responsible and hires Anna Carpenter, a determined young private investigator, to find him. DI Tom Thorne worked on the Alan Langford case, so when Carpenter brings the photo to him, he refuses to believe that the man whose body was found in a burned-out car ten years before can still be alive. But when a prison inmate that he and Anna interview is viciously murdered, Thorne starts to understand that Langford is not only alive, but ready to get rid of anyone who could threaten his comfortable new life in Spain...