Review: Behind You by Linda Regan (audio book) 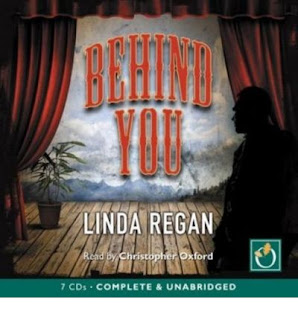 BEHIND YOU is the debut novel from actress Linda Regan and is set in the world of a pantomime over the Christmas period.

A performance of Dick Whittington is cut short when the principal girl, Lucinda, is killed during the "Underwater Ballet" scene - a scene in darkness where the cast cross the stage holding ultra-violet fish so that it looks like the fish are swimming. The death looks like an accident but DI Paul Banham's gut says it's murder. He calls in the murder team which includes his sergeant, Alison Grainger, whom he wants to get close to but finds he cannot, due to the unsolved murder of his wife and child eleven years before. Alison has her own demon - a self-image problem which leads her to hardly eat anything during the investigation.

The police interrogate the cast and get alibis and motives but reluctantly allow the show to go on but a second murder happens under their noses. One of the cast is arrested but the show still goes on. Has Banham got the right person or is it a “stitch-up”?

BEHIND YOU is an intriguing mystery set in a closed-world where the killer must be a member of the theatre company. Even-so it's hard to deduce who the murderer is. This has the set-up of a traditional old-school whodunnit with modern (bad) language and sexual liaisons thrown in. In fact the cast members are so inter-linked by marriage or sex that it would have been useful (to me) to have a cast-list and some family trees in the audio book slipcase. Being on audio, it's harder to backtrack so I did get a bit confused, though that's probably just me.

Whilst the mystery is quite good, and the theatre setting well detailed, the police characters are rather annoying – Banham's rather officious and his young DC Crowther is so immature that he misses the murderer creeping about as he's staring at the chorus girls changing, and Alison is convinced that if she loses 2lbs she'll be attractive.

I unfortunately didn't warm to Christopher Oxford's narration. His accents are good and his female voices are particularly well done but I found his main narration/Banham voice a bit stilted and cold.

The next in the series, PASSION KILLERS, isn't yet available on audio so I will have to order the paperback instead. I'm intrigued to see if Banham and Alison's relationship gets any further and whether any more is made of the unsolved murder of Banham's family.
Posted by Karen (Euro Crime) at 2:26 pm

Sounds intriguing, Karen! I certainly get confused in audio books, I find it harder to concentrate than I do when I am visually reading.

Karen - Thanks for this fine review. I happen to be a fan of those "closed" mysteries where there is a limited number of suspects, and no really obvious choice. I understand what you mean about finding characters to be officious and/or annoying, but I still am going to see if I can get this one and give it a go; it sounds like a good read.