Until I received an email from a US publicist I hadn't appreciated that Juli Zeh's Dark Matter, tr. Christine Lo is to be published as In Free Fall in the US. So this time, which cover and/or title might attract you to the book? I've also included the two different blurbs below.

UK on the left, US on the right 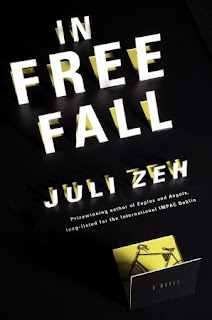 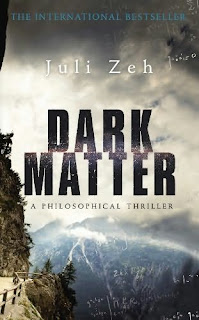 Sebastian and Oskar have been friends since their days studying physics at university, when both were considered future Nobel Prize candidates. But their lives took divergent paths, as did their scientific views. Whenever Oskar comes to visit from his prestigious research post in Geneva, there is tension in the air, and it doesn't help their friendship that he feels Sebastian has not lived up to his intellectual capacities, having chosen marriage and fatherhood as an exit strategy. A few days after a particularly heated argument between the two men, Sebastian leaves his son sleeping in the back seat while he goes into a service station. When he returns, the car has disappeared without trace. His phone rings and a voice informs him that in order to get his son back he must kill a man. As Sebastian's life unravels, the only person he can safely reach out to is Oskar. Then Detective Schilf comes on the scene, with a most unorthodox method of uncovering the truth. With intelligence, wit, precision, and grace, Juli Zeh crafts a philosophical thriller which uses the clash of the ideal and the material worlds, the bending of reality, and the search for a definition of time to explore the ideas of guilt and innocence and the infinite configurations of love.

A child is kidnapped but does not know it. One man dies, two physicists fight, and a senior constable falls in love. In the end, everything is different . . . yet exactly the same.” —Prologue

A rising star who has garnered some of Europe’s most important literary prizes, Juli Zeh has established herself as the new master of the philosophical thriller. With In Free Fall, she now takes us on a fast-paced ride through deadly rivalry and love’s infinite configurations.

Against the backdrop of Germany and Switzerland, two physicists begin a dangerous dance of distrust. Friends since their university days, when they were aspiring Nobel Prize candidates, they now interact in an atmosphere of tension, stoked by Oskar’s belief that Sebastian fell into mediocrity by having a family. When Sebastian’s son, Liam, is apparently kidnapped, their fragile friendship is further tested. Entrusted with uncovering the truth, Detective Superintendent Schilf discerns a web of blackmail, while at the same time the reality of his personal life falls into doubt. Unfolding in a series of razor-sharp scenes, In Free Fall is a riveting novel of ideas from a major new literary voice. With the recent success of works in translation, such as Stieg Larsson’s The Girl with the Dragon Tattoo and The Girl Who Played with Fire, Zeh is poised to take off.

I knew covers often are different but had no idea the difference in 'blurbs' as well.
I like the UK blurb better, because it doesn't say much. The use of "apparently" in the US blurb (in context to kidnapped) seems to be a bit of a clue that shouldn't be there.
As far as covers, I like the UK better as well, but it looks a bit like a Krakauer cover somehow.

A new author to me, with an interesting plot.

Well! Incidentally, another (US?) title for this book is The Theory of Everything. This title, and Dark Matter, are plays on physics and some of the aspects of the book - Free Fall is irrelevant and so less powerful, I think.

As to the blurbs- what can I say? The UK blurb is rubbish because it gives away a plot twist. I am incensed when I am told some event that happens on p 100 in the blurb. What 's the point of reading the book? On the other hand, the US blurb makes the book sound very pretentious and intellectual, and would put me off. In neither case does the blurb put this rather good book to its best advantage.

I prefer the UK cover and title, and the US blurb, the US blurb is a bit zingier somehow.

I agree with Maxine that sometimes the pigeonholing in the blurb can put off potential readers - the blurb for the excellent Water-Blue Eyes nearly put me off by describing it as "literary" crime fiction....

I like the UK cover and also the UK blurb; that would interest me in reading the book. The book does sound like a philosophical (or physical) thriller.

The U.S. blurb to me is all advertising-speak, all promotional phrases, no real content. It does not compel me to read the book.