Just to complete the story, I listened to the relevant part of Phil the Shelf last night and it was confirmed that Gillian Linscott is now writing as Caro Peacock. Despite her being an award winner, her last two books under her real name didn't sell well enough.

Here's the blurb for the first, of a projected three, in the Liberty Lane series: 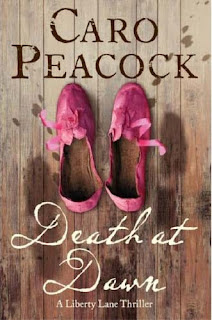 Duelling, derring-do, and dastardly deeds are all in a day's work for Liberty Lane: a new heroine for fans of Matthew Hawkwood and Sarah Waters's Victorian novels. June 1837. She should have remained in the care of her sour aunt in Chalke Bissett, but Liberty Lane was never one to obey instructions. Eager to be reunited with her beloved father, she heads for Dover. But her hopes of surprising him as he steps off the boat are dashed by an anonymous note informing her that he has been killed in a duel at Calais, and commanding her to remain where she is and speak to no one. Thomas Jacques Lane -- radical, romantic, scholar, republican, gambler and devoted father -had led an unconventional life. His movements in the days leading up to his death are a mystery, but of one thing Liberty is certain: he would never have taken part in a duel, for it went against everything he believed in. And if the author of the anonymous note expected her to swallow this lie and meekly obey his command to stay put, he had severely underestimated Liberty Lane. With no resources bar her own wits, she immediately sets sail for Calais in pursuit of the truth - and her father's killer. And as the nation prepares to celebrate the coronation of young Queen Victoria, Liberty uncovers a treasonable plot which could lead to another vicious civil war!
Posted by Karen (Euro Crime) at 1:44 pm

It's a sign of how bizarre the publishing times are that Gillian Linscott's recent books 'didn't sell well enough' and so she's now publishing under a pseudonym. I was an admirer of her books before I was published myself and to my mind her Nell Bray books are among the best history-mystery series. Here's hoping that the name Caro Peacock brings her great success.

Sounds as if I must read her. Well spotted, though, Karen -- you are a true font of wisdom on all things mystery. (or is that fount?)