Orion have recently republished the first six full length Jemima Shaw mysteries, written by Antonia Fraser. These investigations were originally published between 1977 and 1987. The 'buyer beware' is that the second in the series, 'The Wild Island', has been retitled 'Tartan Tragedy': 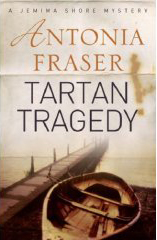 Synopsis:
"I warned you, Jemima Shore, things up here are seldom all they seem ... The body of a young man has been found floating in a pool on a remote island in the Scottish Highlands. It just happens to be the island that TV reporter Jemima Shore has rented for a holiday ... a holiday that is rapidly falling apart. Confronted with a foreboding stone house, a bitter family feud and cryptic warnings from locals Jemima begins to regret her choice. It is only when another body is found tangled in weeds in the river she begins to realize she has become caught up in something very dark indeed. As she tries to fight her attraction to a suspect, Jemima struggles to work out just who she can trust. In this lonely spot it seems that nobody is quite as they first appear ..."

Antonia Fraser hasn't published any detective stories since 1994 and is much more famous as an historical novelist - the recent Kirsten Dunst film was loosely based on her biography of 'Marie Antoinette'.
Posted by Karen (Euro Crime) at 3:55 pm

I remember reading all these when they came out. And there was a TV series, with Maria Aitken I think as Jemima. Maria as in sister of Jonathan, disgraced MP.

I watched that! It was Patricia Hodge as JS. I found the 'nun' one very spooky at the time - not so bad in the book which I read quite a few years later. I've only read a couple and wasn't terribly impressed.