Blue is the Cover...

An article in The Guardian at the weekend bemoans the drab covers of modern books. However two books I've recently come across have very different but equally stunning (I believe) blue covers: 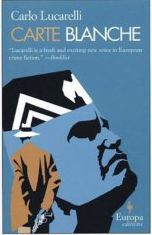 'Carte Blanche' by Carlo Lucarelli (Europa Editions) has a lighter blue cover than shown and is not only striking but the cover is a stiff cardboard with flaps. (I don't know the technical term I'm afraid!)

Synopsis from Europa Editions website:
"April, 1945. The last days of the Salò Republic. A brutal murder on the “good side of town” lands Commissioner De Luca in the middle of a hornet’s nest where the rich and powerful mix drugs, sex, money and murder." 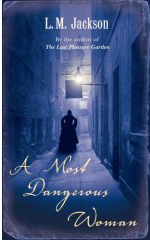 'A Most Dangerous Woman' by Lee Jackson, writing as L M Jackson.

Synopsis from amazon.co.uk:
"'It was said that she had the good manners of a respectable upper servant but was far too young to have been pensioned; that she spoke as if she had received an education, but knew the coasters' slang as if she were born-and-bred to it; and that she not only had no husband - which was a commonplace on Leather Lane - but seemed never to have possessed one.' When the mysterious Sarah Tanner opens her Dining and Coffee Rooms upon the corner of Leather Lane and Liquor pond Street, her arrival amongst the poor market-traders is a nine-days' wonder. Few doubt that she has a 'past'; but no-one can possibly predict how it will return to haunt her. When an old friend is brutally murdered by the unlikeliest of assailants, Sarah Tanner is the only witness. Unable to turn to the police, she reluctantly finds herself drawn back into the dark underworld of the Victorian metropolis. Assisted by unlikely friends, dogged by the criminal machinations of 'the greatest gamester, felon, villain, swindler, and scoundrel in London', she must unravel a web of treachery and deceit, that takes her from the gaming hells of Regent Street to the suburban heights of Upper Holloway; from the slums of St. Giles to the fast-flowing waters of the Thames. Relying on her wits, trading on her past, Sarah Tanner risks gambling her own life upon a desperate quest for justice and vengeance."

'Carte Blanche' is already available but we'll have to wait until April for 'A Most Dangerous Woman'.
Posted by Karen (Euro Crime) at 3:13 pm

I agree with you, both stunning. The Lucarelli cover grabs me the most though!

Both now reside in the review pile so let's hope the content matches the quality of the cover!

Yes, Europa Editions offers some handsome covers wrapped around those books (I have two at home that I can think of, by Alicia Gimenez-Bartlett and Jean-Claude Izzo.)
===================
Detectives Beyond Borders
"Because Murder Is More Fun Away From Home"
http://detectivesbeyondborders.blogspot.com/

Where blue is the cover ...

You've got it Peter!

I've got the Gimenez-Bartlett but not the Izzo (yet).