'The Hollow Core' is the 4th in Horton's Bradford based police procedural series. Out on 1 Dec, you can read an extract on the Orion website. 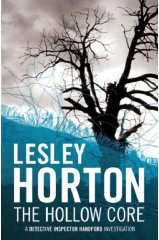 Synopsis from amazon.co.uk:
"Behind closed doors, every family has its secrets. The Ingleby family must look to theirs when Diane Ingleby is shot after a family outing. DI John Handsford and DS Kahlid Ali are called in to investigate and it soon emerges that Diane's husband, Maurice, is widely suspected to be the money behind the local branch of the BNP. He's been on the receiving end of threats before, and it seems his wife might have been caught in the middle. It's a sensitive case, and Handsford and Ali are joined by trainee DC Parvez Miah - son of an influential local Muslim community leader. But when Aisha, Miah's wife, is found badly beaten, it seems that the Inglebys may not be the only family with skeletons in the cupboard. Tension mounts as accusations fly from all sides with the approach of the local elections - but everyone is silent where it matters most. Is it shame, honour, or old-fashioned fear that's keeping everyone quiet? Handsford and Ali must find out before another woman is silenced - permanently."

I'm a little behind in my reading of Lesley's novels, but I highly recommend them. Lesley is another British crime novelist who should reach a wider audience - great characters, good plotting and a slice of multi-cultural life in Britain today from someone who knows!

I think I've got her first one in my TBR. She's part of the 'ladykillers' group who give a very entertaining talk if you get the chance to see them. http://www.ladykillers.info/home.htm.