I spotted this on thriller.startpagina.nl a comprehensive page of links to the crime and mystery world, under their category of 'games'. Released today in the UK (but more easily available in the US I imagine) you can now help Poirot to solve 'The Murder on the Orient Express'.

From the manufacturers website: "Climb aboard the luxurious train and become part of the famous murder mystery as you play the video game adaptation of Agatha Christie's Murder on the Orient Express. Famed game designer Lee Sheldon and AWE Games have teamed up once again to bring mystery adventure fans the second game in the Agatha Christie series.

Staying true to the novel, players will step on to the lavish, richly appointed train that departs Istanbul hurtling toward Paris. The train is filled with passengers, one of whom is the high profile Belgian detective Hercule Poirot. A passenger recognizes him, asks for protection, but is turned down. The next day that individual is found dead.

Players take on the role of Antoinette Marceau, a new character, who works alongside Poirot to investigate the savage murder. With a train filled of suspects, Antoinette will need every tip that she can garner from Poirot in order to pinpoint the killer."

David Suchet is Poirot (thankfully) though it doesn't look much like him and there is a surprise ending.... 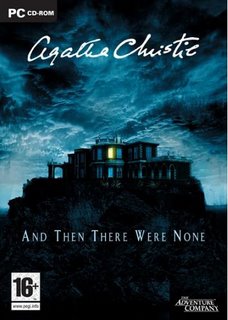 Or there's 'And Then There Were None', released earlier in the year.

Manufacturer's description: "Based on the best selling mystery novel of the same name, And Then There Were None allows players to immerse themselves in the rich world of Agatha Christie.

10 people, strangers to each other are invited to a lavish estate on a remote island. Through a recording their mysterious host accuses each of his guests of murder and proceeds to exact justice. The tension mounts as, one by one, the number of people are reduced through the ingenious plotting of the unseen killer.

Prepare to play the 11th character where only your detective wits can save you now."

On the website you can see a list of characters, scenes and links to a trailer for both games.
Posted by Karen (Euro Crime) at 6:58 pm