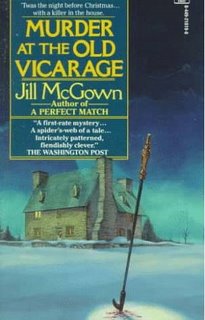 Here's one I've mentioned before, which I read earlier in the year. I didn't write a review but I do strongly recommend it, especially to lovers of unbreakable alibis. The UK title for 'Murder at the Old Vicarage' is 'Redemption' and the library edition of it has Christmas tree baubles on the front but the cover's not on amazon.

Brief synopsis from amazon.co.uk: "Snow began to isolate the village and by the time the body in the vicarage was discovered, Byford was cut off altogether. A domestic murder - Chief Inspector Lloyd thought it would be an open and shut case but it turned out to be much more complicated."

This is the second of the Lloyd and Hill series and fans are eagerly awaiting the fourteenth, hopefully in 2007,

On Jill McGown's website she answers questions about the title change and the connection to Agatha Christie.
Posted by Karen (Euro Crime) at 10:11 am