Royalty in crime (the Windsors)

I've written a couple of brief posts on The Queen's involvement in fictional crime and I've recently come across a couple more recent and upcoming crime and non-crime novels set in Royalty-land, two involving The Queen and Prince Philip.

This series by Allison Montclair, featuring Iris Sparks and Gwendolyn Bainbridge of The Right Sort Marriage Bureau, had completely passed me by but the second book A Royal Affair which has just been published (in the US), caught my eye: 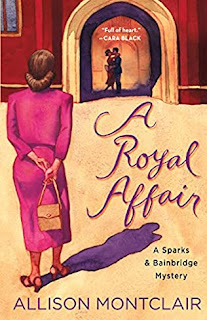 Blurb from amazon:
In London 1946, The Right Sort Marriage Bureau is just beginning to take off and the proprietors, Miss Iris Sparks and Mrs. Gwendolyn Bainbridge, are in need of a bigger office and a secretary to handle the growing demand. Unfortunately, they don't yet have the necessary means. So when a woman arrives - a cousin of Gwen's - with an interesting and quite remunerative proposition, they two of them are all ears. The cousin, one Lady Matheson, works for the Queen in 'some capacity' and is in need of some discreet investigation. It seems that the Princess Elizabeth has developed feelings for a dashing Greek prince and a blackmail note has arrived, alluding to some potentially damaging information about said prince. Wanting to keep this out of the palace gossip circles, but also needing to find out what skeletons might lurk in the prince's closet, the palace has quietly turned to Gwen and Iris. Without causing a stir, the two of them must now find out what secrets lurk in the prince's past, before his engagement to the future Queen of England is announced. And there's more at stake than the future of the Empire - there is their potential new office that lies in the balance.

Flora Harding's Before The Crown comes out in ebook next month and paperback in December. I received a review copy via Netgalley. It's not a crime novel but is an enjoyable, easy read fictionalising the courtship of Elizabeth and Philip. It's full of short chapters, initially alternating between the two leads and then stays with each character for a few chapters at a time when they are separated. It's the sort of book where you don't know how much is true so sends you scurrying off to google: 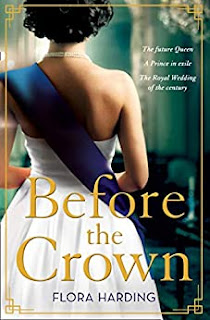 Blurb from amazon:
Before the crown there was a love story…
Windsor Castle, 1943

As war rages across the world, Princess Elizabeth comes face to face with the dashing naval officer she first met in London nine years before.

One of the youngest first lieutenants in the Royal Navy, Philip represents everything she has always been taught to avoid. Instability. Audacity. Adventure.

But when the king learns of their relationship, the suitability of the foreign prince is questioned by all at court.

He is the risk she has never been allowed to take. The risk not even the shadow of the crown will stop her from taking…

Back to crime and earlier than the two novels above, is TP Fielden's Stealing the Crown, which was published this month: 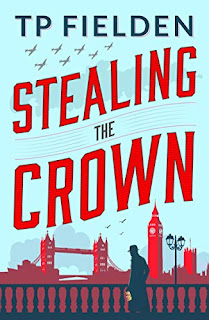 Blurb from amazon:
Britain is at war—but the greatest threat to the Crown might be within the Palace walls.

London, 1941: Major Edgar Brampton is found shot dead in his office in Buckingham Palace. All signs point towards a self-inflicted tragedy, but when Palace authorities hurry his body away and order staff to stay silent, fellow courtier Guy Harford’s suspicions are raised.

While the outside world faces the onslaught of war, within the Palace walls a curious mystery unfolds. Rumours swirl about Brampton’s relationship with the Queen, and there’s talk of other plots involving those closest to the King.

To get to the bottom of what really happened, Guy joins forces with some unlikely allies—Rodie Carr, a beautiful East End burglar, and Rupert Hardacre, a postman with a past—but time may be running out…for him, for the King, and for Britain. Someone has their eye on the crown, and they’ll do anything to get it.

Can Guy solve the case before more blood is spilled on the royal carpets? Or will he be the next victim?

S J Bennett's The Windsor Knot, which I mentioned in an earlier post, now has cover, blurb and release date of 29 October 2020. 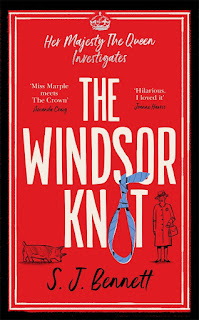 Blurb from amazon:
On a perfect Spring morning at Windsor Castle, Queen Elizabeth II will enjoy a cup of tea, carry out all her royal duties . . . and solve a murder.

The morning after a dinner party at Windsor Castle, eighty-nine-year-old Queen Elizabeth is shocked to discover that one of her guests has been found murdered in his room, with a rope around his neck.

When the police begin to suspect her loyal servants, Her Majesty knows they are looking in the wrong place.

For the Queen has been living an extraordinary double life ever since her coronation. Away from the public eye, she has a brilliant knack for solving crimes.

With her household's happiness on the line, her secret must not get out. Can the Queen and her trusted secretary Rozie catch the killer, without getting caught themselves?

Miss Marple meets The Crown in The Windsor Knot, the first book in the 'Her Majesty The Queen Investigates' mystery series by SJ Bennett - for fans of The Thursday Murder Club by Richard Osman, Agatha Christie and M.C. Beaton's Agatha Raisin.