I recently posted this brief article about follow-ups to the Queens of Crime, written by modern authors, on my library's Facebook page: 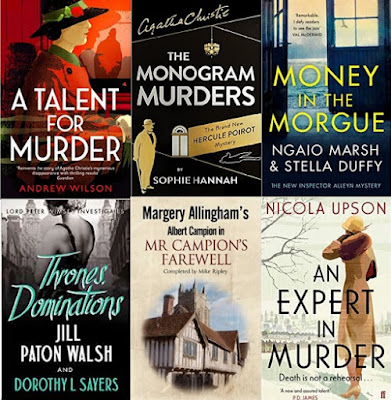 Fans of the Golden Age queens of crime: Agatha Christie, Ngaio Marsh, Dorothy L Sayers, Margery Allingham and Josephine Tey may like to know that their characters and indeed lives carry on in a number of recent books.

Agatha Christie’s infamous 11 day disappearance in 1926 when she absconded to Harrogate has never been officially explained and she does not refer to it in her autobiography. Was it illness after the death of her mother or revenge on her philandering husband that prompted her flight? Or was it due to aliens as postulated by the Doctor Who episode, The Unicorn and the Wasp (available on iPlayer)? The Channel 5 film, Agatha & The Truth of Murder, now available on Netflix, also looks at this event. In books, rather than television, we have Andrew Wilson’s crime series featuring Agatha as the main character which begins with A TALENT FOR MURDER and has another and more sinister take on her disappearance.

If you can’t get enough of Christie’s most famous detective, Hercule Poirot, then you’ll be pleased to know that Sophie Hannah has brought him back to life in a series of books beginning with THE MONOGRAM MURDERS.

Ngaio Marsh’s debonair sleuth Roderick Alleyn returns for one last case in THE MONEY IN THE MORGUE a novel begun and abandoned by Marsh, but now completed by Stella Duffy.

Jill Paton Walsh took up the Lord Peter Wimsey mantle back in 1998 when she was invited to complete Dorothy L Sayers’s THRONES, DOMINATIONS. She has written another Wimsey book based on clues left by Sayers, plus two more from her own ideas.

Margery Allingham is probably best known for her Albert Campion series, televised in 1989/90 starring Peter Davison. Her husband, Pip Youngman Carter, continued the Campion series with two book and an unfinished one which has recently been completed by Mike Ripley as MR CAMPION’S FAREWELL. Ripley has gone on to write six more original Campion novels.

And finally Josephine Tey stars in a series of crime novels by Nicola Upson. As Gordon Daviot, Tey (real name Elizabeth MacKintosh), wrote plays including the hit ‘Richard of Bordeaux’ which starred John Gielgud. And it is this play which forms the backdrop to the first book in Upson’s series, AN EXPERT IN MURDER. In a later book in the series, FEAR IN THE SUNLIGHT, Tey is mixing with the Hitchcocks at Portmeirion.