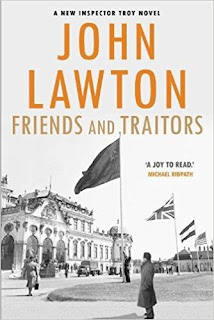 It is 1958. Chief Superintendent Frederick Troy of Scotland Yard, newly promoted after good service during Nikita Khrushchev's visit to Britain, is not looking forward to a Continental trip with his older brother, Rod. Rod was too vain to celebrate being fifty so instead takes his entire family on 'the Grand Tour' for his fifty-first birthday: Paris, Sienna, Florence, Vienna, Amsterdam. Restaurants, galleries and concert halls. But Frederick Troy never gets to Amsterdam.

After a concert in Vienna he is approached by an old friend whom he has not seen for years - Guy Burgess, a spy for the Soviets, who says something extraordinary: 'I want to come home.' Troy dumps the problem on MI5 who send an agent to de-brief Burgess - but the man is gunned down only yards from the embassy, and after that, the whole plan unravels with alarming speed and Troy finds himself a suspect.
As he fights to prove his innocence, Troy finds that Burgess is not the only ghost who returns to haunt him.

This book is a very clever merger of fact and fiction, spread over a long period of time, when we first meet Frederick Troy he is contemplating going into the 'Police' and by the end of the book he is a Chief Superintendent at Scotland Yard. It chiefly details the contact that Troy has over the years with Guy Burgess and his fellow espionage contacts.

I have read almost all of the historical mystery books by John Lawton and my only complaint is that he is just not prolific enough! I appreciate that he writes a lot for TV but to write only eight Inspector Troy books and three others, that is just not good enough. So please John I do hope you write a lot more. Strongly recommended.