Review: The Mine by Antti Tuomainen tr. David Hackston 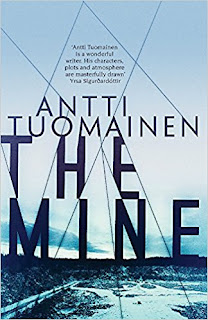 His senses weren’t working the way they usually did. He was too near to the people he had always loved. Up close we cannot see clearly, he remembered someone saying.

A man dies in Helsinki, electrocuted in his bath. Elsewhere in the city a journalist working for Helsinki Today, Janne Vuori, receives an email tipping him off to shady, hazardous practices at a nickel mine in Suomalahti in Northern Finland. With their staff photographer, Janne takes the long trip up north but unsurprisingly the Head of Security at the mine sends them on their way. They don’t even get through the gate.

Back in the city another man is reliving his past by dining in a once favourite restaurant. His thoughts stray to the dead man in the bathtub. And then to another death, that of a man shot-gunned in dazzling southern sunlight.

Suomalahti is a small town with a bank, a supermarket, petrol station, church, optician, hotel, school, cafe. It is not surprising that everyone Janne Vuori asks tells him that “the mine is a good thing”. A site depleted of ore, its current owners Finn Mining Ltd bought it for 2 euros. They announced they would use a new technique – bioleaching, a kind of chemical washing, “proven safe” – which would enable them to salvage the highly commercial nickel. Janne decides to have another nose around but gives the photographer a lift back to the airport. During a frigid phone call with his wife, Janne is reminded that he has forgotten to pay their daughter’s nursery fees. Distance and accusations are filling their marriage with mutual contempt. He is surprised to find the Suomalahti hotel full and sets out for the Casino Hotel seven kilometres further on. In the bar of the Casino Hotel, also filled with mining staff, a drunken man calls out to him: shouldn’t you be on duty tonight? “That shit won’t disappear by itself.” Realising he has mistaken Janne for a work colleague, the drunk apologises but Janne is already heading to his car, snow crunching beneath his feet.

In Helsinki the man reliving past memories contemplates that people’s homes aren’t as inviolate as they think. He considers the people he has followed and how he has slipped into their homes and killed them.

Janne drives along the complex perimeter looking for a way to slip in. He reaches a vast clearing in the forest divided into square sections and notices movement over at the forest edge, arc lights and diggers. He realises that the squares are huge industrial slurry pits smoothed by the snow. The men are digging some kind of canal. He tries to take a photo but his phone has frozen. He heads back to the hotel where, from his room, he spots the shadow of a man in the car park, watching his window; the security chief.

On his return to the city Janne starts researching Finn Mining. The only board member available for interview is the Environmental Officer. Janne is surprised. At their meeting she explains that she is no longer a board member; she has been “promoted” to some vaguely titled post. By the way, did he know that one of the board members died recently? Some kind of domestic accident.

The “hit-man”, for what else can he be, suffers nightmares now. But at least he has found his son …

THE MINE is written through the eyes of two men, a journalist and a killer. There are more deaths, the trail of corruption and environmental threat to investigate and twists of tension as the identity of the hit-man emerges; all embedded in the complicated lives of the lead characters. I read a review on a popular book site which deplored THE MINE because the reviewer didn’t like the lead character. But I tend to congratulate a crime novelist whose characters are human, warts and all – and still you follow them to the book’s end, not just because you are gripping the pages with sweaty, tense palms but because you want to know the end of the story and what happens to its characters.

This is only the second of Tuomainen’s crime novels that I have read. (the first being his glimpse into a dystopic future of climate change and rising waters, THE HEALER) but I intend to read more. An award winning writer, Antti Tuomainen gives each book a fresh take, complex characters, a blend of empathy and objectivity – and above all he is a good story-teller. THE MINE may not be hot off the press but I recommend catching up with it.