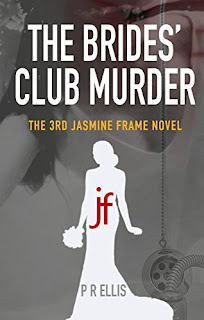 The Brides’ Club is a group of transvestites who like to dress as brides and live out their fantasy of being a bride for a day at an annual weekend retreat which culminates in the Butterfly Ball. This year the event is being held at the Ashmore Lodge and is made extra special by the inclusion of a real wedding between two of its members, with the other brides acting as bridesmaids.

However this happy event is put into jeopardy by the discovery of the body of one of the members of the club. DS Tom Shepherd is called to the scene and feels that he must close the hotel but is persuaded by the organisers to let the event carry on while the investigation is being carried out. His boss, DCI Sloane, suggests that someone should be sent in undercover and who better than their former colleague, now known as Jasmine Frame and renowned for her investigatory skills. She is now working as a private investigator and is undertaking gender re-assignment and nothing will persuade Sloane that Jasmine has no knowledge of the world of transvestites. As far as he is concerned she is the ideal candidate for the undercover work. It is left up to Tom to persuade Jasmine to help out the police.

This is the third novel to feature Jasmine Frame, a woman born into a man’s body, who has started the long process of gender reassignment. She is slowly re-building her life and forming new relationships. The books tackle the difficult subject of being transgender with sympathy and honesty.