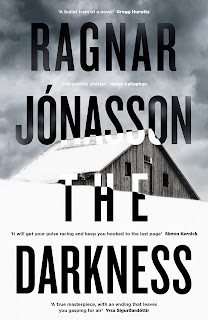 Detective Inspector Hulda Hermannsdottir is a short time away from retirement. One of the few women on the detective team, she feels she has worked hard, and is one of the best detectives, dedicating her life to the force. And yet she feels isolated and undervalued. Not looking forward to her retirement, suddenly she is called into her bosses' office to be told that she can leave now, taking her last couple of months as 'leave', and at the very least she has to leave within two weeks, as a new young hotshot male detective is arriving and needs her office.

All her cases have been re-assigned and there is nothing left for her to do. In shock, Hulda asks for something to occupy her time for a few more days until she has to leave, and is allowed to choose a cold case. She chooses a case of a Russian girl, a 27 year-old called Elena, found dead on some rocks near the beach a few miles away. Her death has been dismissed as probably an accident or suicide. She was a girl no-one really seemed to care about. A mere asylum seeker. Moreover, the investigation into her death was handled by one of her colleagues, Alexander, someone she thinks does sloppy work. A last chance perhaps to show her skills as a good detective, before her inevitable lonely retirement.

As the investigation unfolds, two different stories are told side-by-side. One is the story of a single mother and her attempts to bring up her young daughter, someone we quickly realise is Hulda. This works well to provide some lovely background insight into Hulda's character. The other story, which starts later on in the book, relates to Elena and her disappearance. There is also Hulda’s burgeoning relationship with Petur, a friend from the walking club. Both Hulda and Petur lost their partners some time ago, and Peter is clearly interested in developing his relationship with Hulda, and in finding out more about her.

Hulda's character, the way in which she responds to her shock at her enforced early retirement and the subsequent choices she makes, drive this story. She could just relax, spend time with her friend Petur and simply stop and start to enjoy her retirement. Or, she could carry on with her one last case: a decision that will have a critical consequence for Hulda. This is a fascinating story, touched with an underlying sadness that skilfully unveils Hulda’s life as she carries out her last investigation.