Review: Bring Me Back by B A Paris 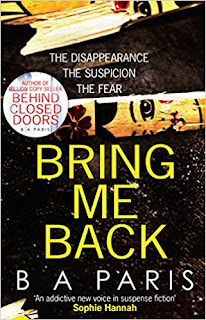 Finn lives with Layla very happily but has anger management issues. On a holiday in France, Layla disappears. Finn is interviewed by the police, a search is made but Layla is never found. Finn however has not told the police that he had a violent quarrel with Layla before she disappeared.

Twelve years later and Finn has relied on friendship with a work colleague – Harry, and a policeman – Tony, who led the search for Layla, to help him grieve. Finn has a relationship with Ruby who owns the Jackdaw Pub. However he finishes with her to take up with Layla's sister Ellen.

Finn lived with Layla in St. Mary's in Cornwall, although they met and lived in London and he now lives with Ellen in Simonsbridge in the Cotswolds along with Peggy, Finn's dog.

There are various unsubstantiated sightings of Layla, but suddenly small Russian dolls are found which have a connection between Layla and her sister. They had lived with their parents on the Isle of Lewis. Their mother died and their father was a violent drunk. Finn starts getting emails – could they be from Layla or someone who is holding her? Finn keeps these secret from Ellen. Do Harry and Ruby know more than they are admitting?

BRING ME BACK is an unusual book from an author I have not read before. You have to suspend belief at some of the foolish things that Finn does. It is actually a study in mental breakdown, but exactly whose, you will have to read the book to discover. Recommended.

Labels: B A Paris, Bring Me Back, Geoff Jones, Reviews