Earlier in the year, Danish author Inger Wolf's Under a Black Sky was free on Kindle for a while, and now Dark September has been made free. Both titles are translated by Mark Kline.

If, like me you prefer to read a series in order if at all possible, then you'll be pleased to know that Dark September is the first in the Daniel Trokic series. [Under a Black Sky, currently 99p on kindle is the sixth in the series.] 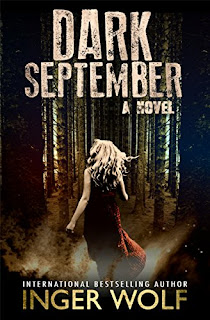 It is late September, and Anna Kiehl, a student of anthropology and a single mother, does not return from her evening run in the forest. The next morning, she is found dead. She is naked, her throat is cut, and there is a bouquet of poisonous hemlock on her chest.

Police inspector Daniel Trokic is in charge of the investigation, and it leads him to the case of a prominent scientist and specialist in neurochemistry and antidepressants who disappeared eight weeks earlier. Daniel Trokic must get to the killer before he strikes again, but this turns out to be a dangerous pursuit.

Suspenseful and fast-paced. Winner of the Danish Crime Academy's Debut Award in 2006 for the most exciting debut of the year.
Posted by Karen (Euro Crime) at 9:03 am